A CHINHOYI-based Zimbabwe Prisons and Correctional Services (ZPCS) officer has appeared in court for allegedly making a disparaging comment over a picture in which President Emmerson Mnangagwa and traditional chiefs are captured kneeling before the recently erected Mbuya Nehanda statue in Harare.

The accused is Peter Kudzai Mushonga (29) of Coldstream suburb in Chinhoyi and is employed by ZPCS as a prison officer, stationed at Chinhoyi Prisons Camp.

He was arraigned Wednesday before magistrate Tapiwa Banda facing charges of contravening Section 33 of the Criminal Law (Codification and Reform) Act Chapter 9:23, which relates to “undermining authority or insulting the President.”

Mushonga was granted $5 000 bail coupled with stringent reporting conditions. The matter was remanded to 23 June for routine remand.

The state, led by prosecutor Irene Mapfumo, claims Mushonga made the comment about or concerning the President “realising that there was real risk or possibility the statement may engender feelings of hostility towards or cause hatred, contempt or ridicule of the President, whether in person or in respect of his office”.

Circumstances are that on 26 May 2021, Mushonga posted a comment on FaceBook in response to an image in which Mnangagwa, traditional chiefs and other dignitaries were kneeling before Nehanda Charwe Nyakasikana (Mbuya Nehanda)’s statue in reverence of the icon.

The court heard Mushonga posted through his FaceBook account a comment in Shona language which read, “Dai vakapenga vese vapfugamira chidhori ichooo”, loosely translated to mean “Wish madness befalls all those who have knelt before the idol.” 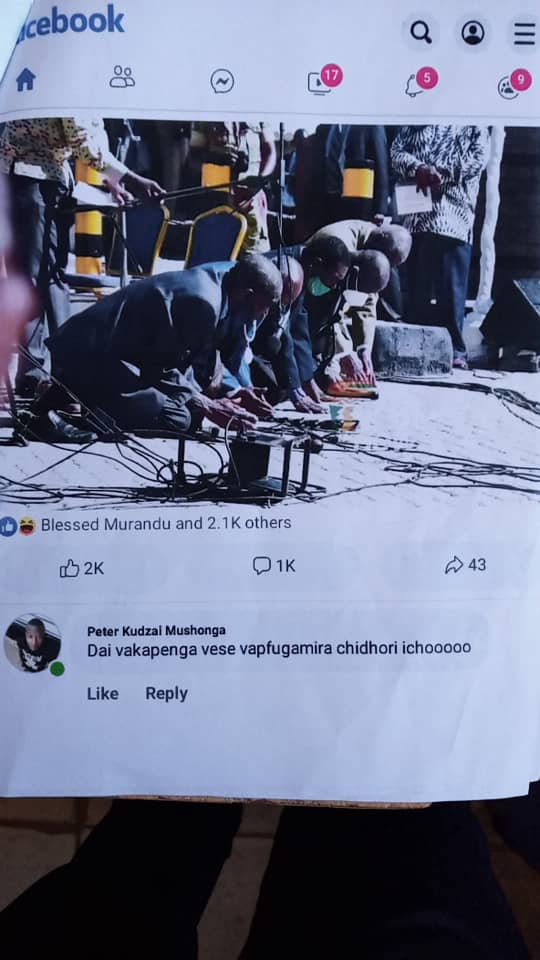 The post that invited trouble for the prison officer

A printout of the said message will be produced in court as evidence.

Mushonga was not represented by a lawyer.