ENVIRONMENT lobby group, Keep Bulawayo Clean, has revealed plans to triple the number of litter bins in the city’s Central Business District in order to promote a litter free environment while reducing chances of a disease outbreak such as cholera.

In an interview with NewZimbabwe.com, Tonderayi Shoko who is the group’s spokesperson said the organisation is also partnering similar pro-environment groups across the country in order to clean up all corners of Zimbabwe.

“We have been running this initiative for the last 1114 days and I am happy to say that this year we have made great strides in spreading out the initiative.

“As Keep Bulawayo Clean, we want to donate as many bins as possible in the Bulawayo CBD. Our target is three bins at each corner in order to encourage people to separate litter for recyling reasons,” said Shoko. 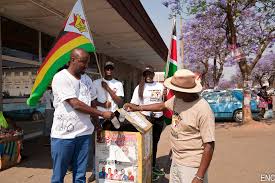 The organisation was part of the groups which teamed up with first lady Auxillia Mnangagwa in last October’s clean-up campaign during which they also planted trees in Lupane Centre.

“In recent times, we have had successful clean up campaigns in Kariba, Lupane and Binga where we also did tree planting on a large scale. We are planning on doing more visits around Zimbabwe and beyond as we share our initiative,” Shoko added.