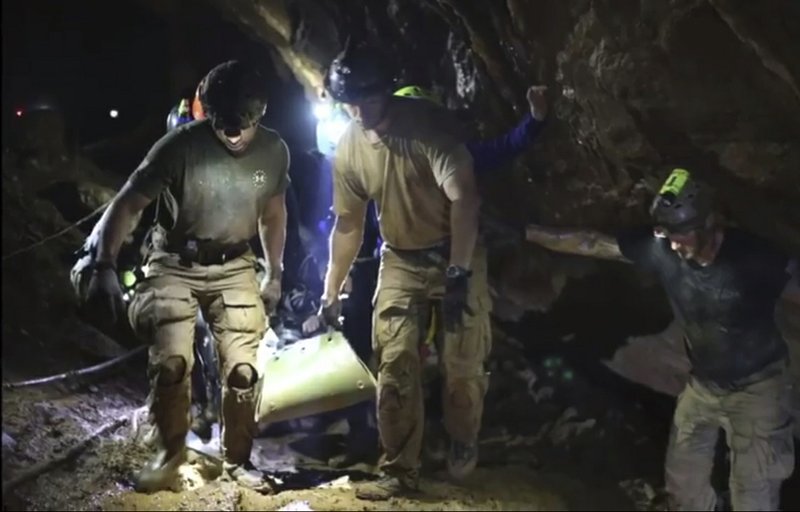 NEW YORK: The boys are out of the cave. Now Hollywood wants in.

The producers behind Christian films like “God’s Not Dead” are already in Thailand with plans to develop a movie about the 18-day saga of the soccer team trapped in a flooded cave.

Though the drama of headline-grabbing rescues often doesn’t carry over the big screen, Pure Flix Entertainment co-founder Michael Scott believes the story about the 12 boys and their 25-year-old coach is ripe for movie adaptation.

“We realized that this would make an incredibly inspiring movie,” Scott said Wednesday, speaking by phone from Thailand. “Like a lot of people, we know there’s not a lot of positive news in the world today.”

Scott said he feels a personal connection with the story. His wife is Thai and he said he was spending the summer in Bangkok when the soccer team went missing. Scott and fellow producer Adam Smith recently traveled to the area around the cave in the northern Thailand, and they have begun talking to some of the participants about their “life rights.”

But they also stressed that they aren’t yet pursuing most of the families of the boys, who on Wednesday remained recuperating in a hospital.

“For us it’s not a huge race,” said Smith. “It’s about making sure we get the authenticity right.”

Many hurdles await. Most films that enter development never get produced, and the producers are just beginning to seek a screenwriter. Other film productions companies will surely show interest, and they could leapfrog ahead with a larger production.

And while the Arizona-based Pure Flix has found some success with low-budget Christian films (“The Case for Christ”) and conservative documentaries (“Hillary’s America: The Secret History of the Democratic Party”), it’s far from a Hollywood heavyweight. Others in TV and film are already looking to capitalize. Discovery has scheduled one-hour documentary special to debut Friday.

But Pure Flix hopes they can beat any fiction-film rush.

There’s also some reason to doubt the box-office appeal of the tale. Ripped-from-headlines movies have not been setting the world on fire. Though Clint Eastwood’s “Sully” was a success, his 2018 docudrama about the 2015 Thalys train attack, “The 15:17 to Paris,” disappointed. Michael Bay’s “13 Hours: The Secret Soldiers of Benghazi” (2016) was the director’s worst performing release. Peter Berg’s 2016 big-budget drama about the 2010 oil rig explosion “Deepwater Horizon” likewise fizzled.

The best comparison would be 2015′s “The 33,” about the 2010 mining disaster in Chile that trapped 33 miners for two months. Though boasting a starry cast of Antonio Banderas, Josh Brolin and Juliette Binoche, it made barely a blip at the box office, with $24.9 million worldwide.