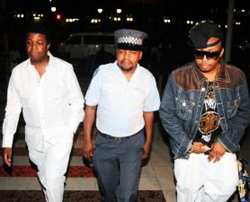 SOUTH African kwaito star Professor will have to face the music for wearing an eThekwini metro police uniform to an awards ceremony, the National Prosecuting Authority said on Wednesday.
The NPA has issued a summons for Professor, real name Mkhonzeni Langa, to appear in the Durban Magistrate’s Court on 17 May, spokesperson Natasha Ramkisson said.
He would face charges of impersonating a police officer, possession of a police uniform, and wearing a police uniform, in violation of the SAPS Act of 1995.
He wore the uniform at the Metro FM Music Awards held in Durban on February 23. He had been expected to appear in court the following week, but the chief prosecutor referred the case back to police for further investigation.
Ramkisson said on Wednesday the investigation had been completed and the senior public prosecutor had decided to take the matter to court.
Under the SA Police Service Act it is an offence for anyone not a police officer to wear a police uniform without permission. The act also regulates unauthorised use of metro police uniforms.
If convicted, Langa could be fined or sentenced to six months in jail. Impersonating a police officer carries a jail term of up to two years.
Ethekwini mayor James Nxumalo was among those who saw Langa receiving his two awards in the uniform.Advertisement