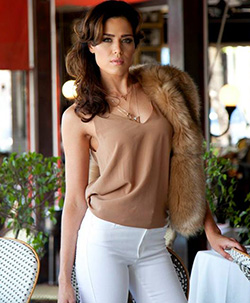 TRACEY Anne Buckley Aggett, Mrs Zimbabwe Universe 2016 finalist, is set to represent the country at the Mrs Universe global pageant in China in September.
Growing up in both Zimbabwe and Botswana, Tracey-Anne Buckley has an avid love of the outdoors and being active.
Reminiscing about her childhood she recounts her love of fishing with her dad, and smiles at the memory of winning her first fishing competition at the age of 6. In high school she was Sportswoman of the Year and broke two school records for swimming.
It was her love of fashion and glamour however, that stuck. At a young age, Tracey enjoyed playing dress up with her mom’s shoes, jewellery and lipsticks.
After leaving school, she went on to study beauty and gained worldly experience traveling the globe on cruise liner ships.
The love affair with fashion was strengthened when she went on to study fashion design, fashion merchandise and retail management. Children’s clothing is rated at the top of her list.
“I love designing little girls’ wear, it’s so much fun and so playful – pink and sparkles all the way,” she explains.
Tracey’s first pageants included Miss Summer strides in Bulawayo, after which she went on to participate in Miss Garden Route 2010, wining 2nd Princess, Miss Personality and Miss Charity.
It was during this time that Tracey was exposed to the plight of abused women and children.
“Being with these woman and children opened my heart and mind to the harsh realities of life and a small effort can change many people’s lives for the better,” she says.
Relocating to Durban in 2013, and enduring some challenging times, Tracey suffered complications after falling pregnant twice and losing both children before carrying to full term.

Overcoming these experiences, she feels, led her to becoming a stronger woman and opened her heart to others experiencing similar tragedies.
Inspired to make a difference, Tracey participated in Mrs KZN 2016 and won – a feat she now believes she gives her the platform to accomplish her goals at improving the lives of women and children in less fortunate areas.
Those goals include building a movable pre-school in the rural areas that will provide basic education, food and first aid.Advertisement

“Having this title means I can now be a voice, help and support,” she says.
“I would like to create awareness of what these rural children face, be a supportive friend to the women in the communities and show them that our challenges define us and we can do anything we set our hearts on. Trust, believe and have faith.”
Using her knowledge of beauty, fashion design, makeup artistry and her warm and easy going personality, she has pooled her skills into image consultancy and styling.
Describing this as wonderful and rewarding career path, Tracey says it has led to a collaboration with Kelly Herbst-  a professional photographer.
The duo has created Le – Fem workshops which offer women personal development, confidence boosting, tips on maintaining a healthy lifestyle at home, work and within the family.
Through all of her experiences Tracey emphasises that her husband Simon has been a rock in her life, supporting her through everything.
“He has always been there for me and supports me in all my endeavours, we are a team!”
In her downtime Tracey likes to relax with her husband and their three dogs (or fur babies as she likes to call them) at home and they are looking into adopting their own child in the future.
She describes herself as a sucker for a good romantic comedy and, of course, loves a good day at the spa when she gets the chance.
With the crown of Mrs KZN firmly in her grasp, Tracey’s next big pageant is at the Mrs Universe competition where she will represent her birth country, Zimbabwe.