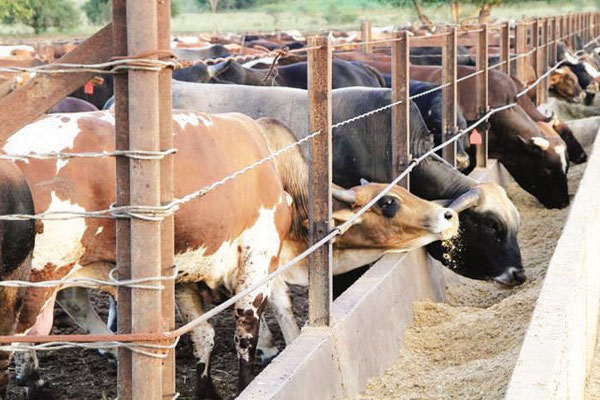 FOR many years, small holder farmers in Chiredzi and Mwenezi used to depend on natural fields for pastures.

But the pastures have been depleting due to climate change-induced weather changes.

Many smallholder farmers in the area did not take livestock farming as a business but kept cattle as a sign of wealth.

Their cattle have been dwindling due to drought induced deaths. The smallholder farmers would also be forced to sell their cattle to middlemen at low prices when drought visited.

An intervention by international organisations such as the Welthungerhilfe, World Vision, Sustainable Agriculture Technology in partnership with the government and with funding from the European Union is now changing their fortunes.

The organisations have partnered in a Beef Enterprise Strengthening and Transformation (BEST) Project which seeks to create a robust, competitive beef value chain that promotes enhanced trade, employment creation, food security, and inclusive green economic growth by 2023 for 25,000 small to medium as well as commercial cattle farmers

The BEST project intervention is a private sector driven initiative to sustain and commercialise the beef value chain. BEST private sector engagement specialist Onious Mthethwa said: “The project has come up with a lot of initiatives so as to boost cattle farming in 10 districts across the country and positive results are being repeated as farmers are now enjoying the profits

“We have established two main cattle business centres in Mwenezi and Chiredzi.

“The CBCs are a livestock agribusiness hub with supporting infrastructure where farmers can access extension, bullying services, input and output marketing services among other services.”

Aaron Tsumele, a 73-year-old cattle farmer in ward 10 Tsumele Village, in Chiredzi received US$8423 after selling 22 herd of cattle at the Muhlanguleni CBC.

“I have since managed to buy a vehicle  and also managed to import a brand new Massey Ferguson 178 tractor from South Africa  since I started  participating in the BESt project,” Tsumele said.

Daniel Muzamani, a 70-year-old cattle farmer from Munengwani Village ward 10 added: “We have many cattle in this area but in the past it was not easy to enjoy any meaningful returns.

“I fattened seven herd of cattle during the 2020 fattening cycle.”

“During the 2021 fattening cycle, I selected five steers from my herd and realised a total of US$4047 having used about US$47.00 to purchase vet drugs and a few other inputs,” Muzamini added.

Muhlanguleni main CBC chairperson, Philip Makondo fattened 34 herd of cattle at the CBC during the 2021 cycle.

“The project came into our area promoting cattle fattening as the best viable form of beef production business. l saw this as a good business opportunity despite it being my uncharted territory,” he said.

“I sold my pen fed cattle and realised a total of US$13 020, from which I managed to buy an Isuzu KB bakkie for US$10 500. The BEST project made me realise the potential wealth I could unlock from cattle production”.

Last year, the BEST project facilitated the marketing of more than 650 cattle as direct sales through the cattle business centres in Chiredzi.

The BEST project is working with MC Meats (off-taker), First Mutual Finance (financier), National Foods and Windmill (inputs providers) as it seeks to boost beef farming in the Chiredzi and Mwenezi.

The project has trained several beef farmers to come up with supplementary feeding.

The supplementary feeding programme is meant to alleviate livestock deaths due to lack of pastures. The BEST project is being implemented in Buhera, Makoni,Chiredzi, Mwenezi, Gokwe South, Kwekwe, Lupane, Mt Darwin, Shurugwi and Umguza.