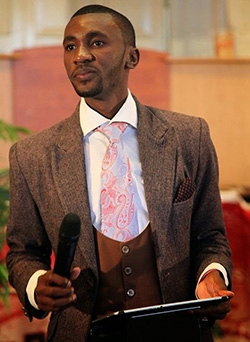 PROPHET Passion Java and his wife, Yasmin, have opened a state of the art studio where gospel artists experiencing difficulties to record their music can now do so for free.
Java, head of Passion Java Ministries, said the idea of the studio, named PJ Records, was to provide a platform for gospel artists to show case their talents and grab their breakthroughs.
“There is a lot of talent in the country that needs to be tapped and they (artists) need to realize their dreams.
“They have powerful voices but they are not being heard because of financial constraints that is the reason why I opened a studio where they can record free of charge,” Passion said in a statement.
The studio is based in Harare’s posh Borrowdale neighbourhood. Take 5 will be the main man at the state –of–the art facility.
PJ Records is soundproof and, it is rumoured, comes equipped with Apple Logic recording software and houses a central lounge area with a tech panel, main recording room with Steinway piano and vocal room.
The studio will also give students a higher education in music and round off their preparation for careers in the recording industry.
“There are a lot of talented singers in Zimbabwe and some of them do not have money to record their songs,” said Passion.
“I feel this should not hinder their dreams hence this studio. We hope songs that will uplift people’s spirits and change their lives for the better will be recorded at this studio,” he said.
Passion will next week host the Manna Feast conference at City sports centre.
He will bring Noel Jones is an American minister and senior pastor of the City of Refuge Church in Gardena, California, which has about 17 000 members and was formerly the Greater Bethany Community Church.
Renowned prophet Emmanuel Makandiwa will also preach at the conference among a host of other powerful preachers.

Recently, Passion was spotted in town distributing freebies to street kids, in a fashion more reminiscent of the biblical ‘manna from heaven’.
Born Passion Java and started as a member of the Tebernacles of Grace ministries.
Passion then moved to Cape Town where he also grabbed headlines for his ability to tell a stranger’s identity number.
He then earned the nickname ‘ID Prophet’ and when he returned to Zimbabwe in 2012 and continued with same miracles and started Kingdom Embassy.Advertisement

After that he opened a branch along Samora Machel Avenue where he held lunchtime services that were always filled to capacity.
Since then, the church has generated a large following and boasts 18 branches across Africa.
Now in his mid-twenties, Prophet Passion owns a plush house in Borrowdale Brooke, the country’s number one residential address.
He also opened a television station K-TV which beams across the world. He is married to Prophetess Yasmin and the couple is blessed with a son called Uebert.