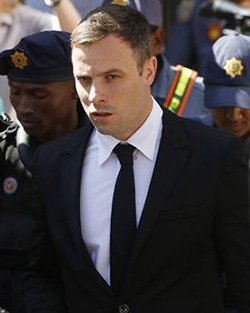 SOUTH African track star Oscar Pistorius should serve at least 10 years in prison for killing his girlfriend, Reeva Steenkamp, on Valentine’s Day last year, a state prosecutor said at the close of the athlete’s sentencing hearing on Friday.
Judge Thokozile Masipa adjourned the session until Tuesday, when she is expected to sentence Pistorius and end a six-month, on-off trial that has captivated millions worldwide.
The 27-year-old Paralympic and Olympic athlete, whose lower legs were amputated as a baby, was convicted of culpable homicide last month for the shooting of 29-year-old law graduate and model Steenkamp.
“The minimum term that society will be happy with will be 10 years imprisonment,” chief prosecutor Gerrie Nel told the hearing. “This is a serious matter. The negligence borders on intent. Ten years is the minimum.”
The defence and prosecution teams have spent much of the five-day sentencing hearing arguing over whether Pistorius should go to jail or be punished with house arrest and community service.
Legal experts are split on the likely outcome. A non-custodial sentence would likely spark public anger, fuelling a perception among black South Africans that, 20 years after the end of white-minority apartheid rule, wealthy whites can still secure preferential justice.
Masipa is only the second black female judge in South Africa.
“We shouldn’t fail the parents. We shouldn’t fail society. Society may lose its trust in the court,” Nel said.
Defence attorney Barry Roux earlier said the double-amputee sprinter should be given community service because he had shown remorse and had been punished enough since he shot dead Steenkamp through a toilet door in his Pretoria apartment.
Pistorius said he mistook Steenkamp for an intruder.
“He wants to make good as far as possible. Serious regard should be given to a community-based sentence so something good can come out of this,” Roux said.
Pistorius, known as “Blade Runner” because of the carbon-fibre prosthetics he uses on the track, escaped the murder charge when Masipa ruled the state failed to prove he intended to kill when he fired four 9mm rounds into the toilet cubicle.
Pistorius wiped tears from his eyes as Roux condemned the media for “attacking” the double-amputee athlete with “lies” about the night of the shooting as they encouraged the public to believe he deliberately murdered Steenkamp.Advertisement

“He was denigrated. It must be punishment in itself to be called a ‘cold blooded murderer’,” Roux said, referring to one newspaper headline written before the verdict.
Nel countered by saying Pistorius “loved” the media when they covered his athletic triumphs and he could “never be a victim” because he was responsible for his own downfall.
The head of the prison service Zach Modise told the court on Thursday that Pistorius would be committed to the hospital wing of one of South Africa’s toughest prisons if he is sentenced to jail term.