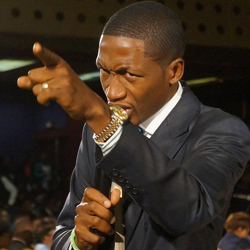 IN THE 17th century, Martin Luther once taught that: “God our Father has made all things depend on faith so that whoever has faith will have everything, and whosoever does not have faith will have nothing.”
This teaching was true then and it is as true, if not more so, in our day. We all are very much aware that we are living in challenging times. Economic uncertainty is prevalent in the world today, but God proffers ways for us to overcome these challenges through his servants.
The crusade against the preaching and teaching of what the media and many others have called the “prosperity gospel” continues.Satan’s influence is flourishing, not only in the hearts of those who seek to vilify and criminalise God’s servants, but also on the morality and integrity of people everywhere. Our safety lies in the virtue of our lives. Our strength lies in our righteousness. God has made it clear that if we will not forsake Him, He will not forsake us.
Notwithstanding the perilous nature of our time, many Christians are falling into the trap of slandering men of God, who are sent with a special message to liberate us from the bounds of poverty. It has become normal to not only criticise but insult men of God, we call them all sorts of names, we deny the word that God has sent them with and the blessings thereof, simply because they drive fancy cars and live comfortable lives, a template which is argued does not match that of Christ.
The question is: if they moved around on the back of donkeys, as Jesus did, would you pay heed to the message that they preach? The message that has been labelled “the prosperity gospel” is in actual fact the message that unshackles you from the bounds of poverty, lack and disease. The tragedy is that a great many of those who claim to be Christians oppose this plain but true message because they lack knowledge of how God works with his servants (his prophets).
“Blessed are you when they revile and persecute you and say all kinds of evil against you falsely for my sake. Rejoice and be exceedingly glad, for great is your reward in Heaven. For so, they persecuted the prophets who were before you (Matthew 5:11-12).”
I was one of those who fell into this category. Every time someone mentioned the name Prophet Makandiwa or Angel, I would leap up and say “matsotsi” (crooks), they steal from the poor, but, little did I know then that I was blind to the liberating effect of the gospel that those propagating the so-called-prosperity-gospel preached. I had argued and argued and fought against this message to a point of convincing myself and perhaps others that these men only wanted to enrich themselves.Advertisement