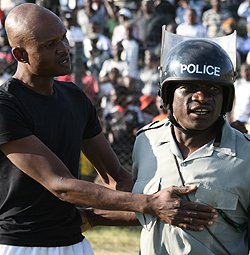 LEAGUE leaders Highlanders have been fined $8,000 for the violence that marred their season-opening 2-0 win over Shabanie Mine at Maglas Stadium on Good Friday.
Highlanders must pay the fine before May 31, the Premier Soccer League’s disciplinary committee said in a ruling released on Wednesday. The Bulawayo club will also be required to foot the cost of the hearing held on April 16.
Shabanie were absolved of any wrongdoing, despite protestations by Highlanders that the Zvishavane club had not provided adequate security.
Highlanders were found guilty of misconduct under rule 31.1.13 which imposes obligations on clubs “where its supporters misbehave in any manner whatsoever, inside or outside a ground before, during or after a match, no matter on which ground the matter is played.”
In its judgement, the PSL noted that trouble started when Highlanders’ Knox Mutizwa was cautioned for diving.
Highlanders fans in the western bay south of the VIP stands reacted angrily at the caution and started pelting the first assistant with stones and a steel coated pipe, while those in the eastern stands also took aim at the second assistant.
At the end of the match, Highlanders fans in the eastern bay threw stones at the second assistant and one of them hit him on the thigh, while running battles were fought outside the stadium.
Highlanders can appeal the ruling and sanction.