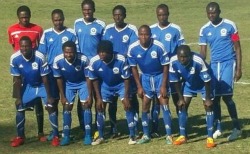 JUST two years after Tripple B were relegated from the PSL, Border Strikers have made the grade, becoming the third team from the border town after Underhill, who were promoted in 2009, and Tripple B in 2011, to play top flight football.
Now, there will be three teams from the Central Region, giants FC Platinum, based in Zvishavane, Chapungu in Gweru and Border Strikers.
Border Strikers become the third team to be promoted after Ngezi Platinum and Bulawayo City won the sole tickets from their respective Northern and Southern Regions.
Last weekend, it was the turn of Border to be crowned champions after they beat Blanket Mine 1-0 to end the season on 67 points.
Border Strikers’ biggest undoing could be the unsuitability of their home ground Dulibadzimu to host top flight matches against the big guns due to security reasons.
Two seasons ago, Tripple B were forced to play Dynamos, FC Platinum and Highlanders at Mandava, which killed them financially.
In the Eastern Region, Mutare City Rovers are now on top of the log after they beat Melfort 2-1 while former leaders Hartley Academy suffered a 0-0 draw against Gaza Gunners.
Former PSL side Masvingo United are also in the mix after overcoming Tenax 3-1 on Saturday.
Mutare City have 64 points from 31 matches, while Hartley are in second position with 63 points from the same number of matches.
Masvingo United are just three points behind the log leaders, with just three matches remaining before the season comes to an end.
Border Strikers were expelled from the Central Region in 2012 for failing to fulfil league fixtures due to financial problems.
The club then needed a consortium of 10 businesspeople from the border town, who met in September 2014 to revive it and chipped in with massive financial resources for its re-affiliation into the league.
Maxwell Ngwenya was appointed the chairman of the board of trustees while Jabulani Ndou took over as chairman of the executive tasked with day to day running of the club.
Loud Ramakgapola, the Beitbridge Town Council secretary is the club patron.
Gibson Makhanda, a former striker at Border Strikers, and ex-secretary of Tripple B, was also part of the initiative.
Unheralded coach Never Malunga was appointed head coach and got it right the first time, although it was never part of the club’s long term plan to win the league in their first year of return.Advertisement

The plan was to consolidate the gains of 2015 and then aim for the league title
next season.
But by September, they had opened a nine-point lead at the top and with the nearest rivals Shabanie Mine struggling, Border Strikers went for the jugular and were duly crowned champions.