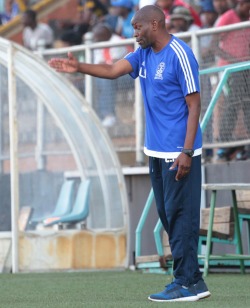 THE Premiership’s big three Dynamos, Highlanders and Caps United were all held to draws in their respective league matches at the weekend.
Highlanders were held to a 1-1 draw by Chicken Inn while Caps United drew 0-0 against Hwange at the Colliery.
The log standing remained unchanged with FC Platinum still at the top on thirty nine points, Caps United in second place on thirty six points, Highlanders third on thirty two points while Dynamos slumped to sixth place with 28 points. The Mbare giants were held to another 1-1 draw at home by plucky Bulawayo City in a tense Castle Lager Premiership tie at Rufaro on Sunday.
The Glamour Boys have now gone for six matches without a win having suffered a 2-1 defeat to lowly Border Strikers last week.
Dynamos coach Lloyd Mutasa- unhappy with the performance and behaviour of some of his players who are said to be sabotaging the team so that Mutasa is sacked-took a huge gamble and dropped several key players.
Goalkeeper, Tatenda Mukuruva, striker Rodreck Mutuma, midfielders Denver Mukamba and Stephen Alimenda, were axed from the team with the coach opting to field younger players, goalkeeper Tonderai Mateyaunga, Musa Madhiri, King Nasama and Kudzanayi Nyakasaka.
Mateyaunga was later pulled off after he got injured and was replaced by Ashley Raynes.
Wisdom Mutasa, who was only cleared late on Thursday night, was also thrown into the fray but limped off injured in the second half. He was replaced by Takunda Sadiki who was also cleared on Thursday.
And it appeared as if it would pay off after Masimba Mambare thrust Dynamos ahead on 15 minutes profiting from a beautiful free kick by Ocean Mushure on the edge of the area which was parried back into play by goalkeeper Ndodana Sibanda.
But Bulawayo City refused to be cowed into submission and threatened with some dangerous raids with Sipho Ndlovu coming close at the stroke of the first half.
In the second half, Dynamos could have doubled their lead on 46 minutes but Madhiri was denied by goalkeeper Sibanda.
Ndlovu, however, got it right on 54 minutes-drilling a low shot past goalkeeper Tonderai Mateyaunga to level the score line.
After the goal, Bulawayo City coach, Try Ncube, pulled off Innocent Kutsanzira and brought in veteran Muthulisi Maphosa as he sought to defend. But it was Dynamos who appeared on course to wrap up the tie but Nyakasaka missed a headed opportunity at the stroke of full time.Advertisement

Mutasa said his players did well despite conceding a goal. “I thought we gave them a goal and we did not execute the few chances we got.  I think the problem we had is that we have not been scoring as much as we can but when we scored like today we gave them a goal which I thought we should not have given them,” said Mutasa.
Asked why he chose to drop most of the regular players, he responded: “People play on merit.  We train every day and the way we train is the way we play. The players that played today were the ones who were ready to play. The youngsters, I thought, did well but we will have to go back to the drawing board,” said Mutasa.
Ncube who was elevated to the top post after former Bulawayo head coach Philani Ncube was involved in allegations of match fixing said he was happy with the result considering they were playing away.
“I am happy with the point we got considering we were playing away although we wanted the three points. The plan was to shut down Dynamos and absorb as much pressure as we can. We didn’t want to concede after scoring that goal so we introduced Muthulisi Maphosa to try and stabilise things,” said Ncube.