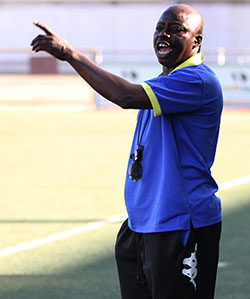 SEVEN teams are still battling for survival as the 2014 Premier Soccer League campaign staggers to the finishing line.
Chiredzi and Bantu Rovers on 15 and 25 points respectively with just two matches left before the end of the soccer season are already relegated.
Chiredzi host Triangle in their next match before visiting FC Platinum in the last match of the season but those fixtures will be just of academic interests.
Bantu host How Mine and then travel to Kadoma to merely fulfil fixtures as they have already been relegated.
However, Shabanie Mine and Black Rhinos, with 32 and 34 points respectively, are aware they have mathematical chances of surviving the axe if they win their remaining two matches.
Shabanie take on Highlanders at Maglas Stadium at the weekend before winding the campaign up with a trip to Triangle.
A victory in those two matches would take Shabanie’s points tally to 38 which could see them survive although that will depend on results elsewhere.
Elsewhere Black Rhinos is one of the four teams with 34 points also battling to survive the chop.
Harare City, Triangle and Chapungu also have the same number of points and are aware the last two matches are crucial as victories could lift them to the safety zone.
Black Rhinos would end the season with 40 points – good enough for a team to survive if they win their last two matches against Chapungu (away) and Bantu Rovers in Kadoma.
Harare City facing off Caps United this weekend and then finishing the season with a date against Chicken Inn can also end on 40 points while Triangle who clash against neighbours Chiredzi and Shabanie in the last two matches of the campaign can also end the season with the same number of points.
No team is really prepared to drop points at this stage of the championship.
Four teams will be relegated at the end of the term.
FIXTURES
Saturday: Dynamos v ZPC Kariba, Chicken Inn v Buffaloes
Sunday: Chapungu United v Black Rhinos, Chiredzi v Triangle, Hwange v FC Platinum, Shabanie Mine v Highlanders, Caps United v Harare City, Bantu Rovers v How Mine