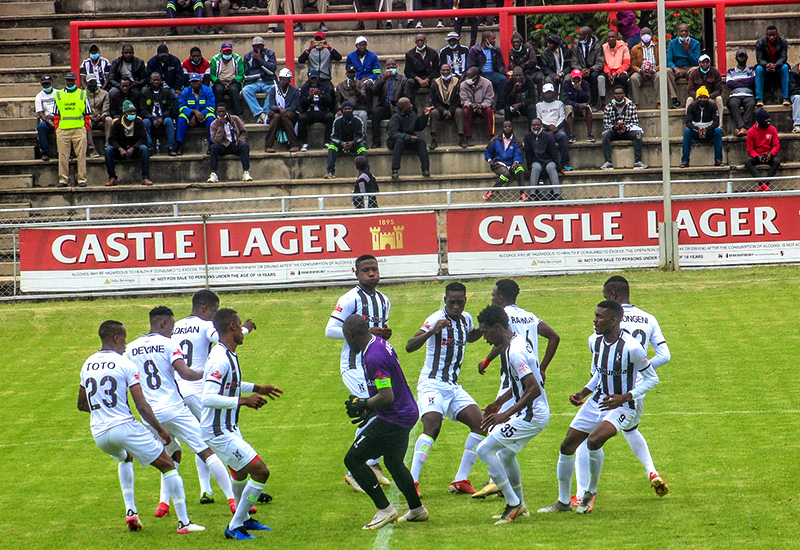 Spread This News
By Sports Reporter

BULAWAYO giants Highlanders moved within a point of a place in the top four after coming from behind to secure a crucial 2-1 victory over CAPS United in an entertaining Castle Lager Premier Soccer League match at Barbourfields Stadium on Sunday.

Bosso, who had failed to win their last two matches after being held to frustrating draws by Tenax and Herentals, were desperate to register a win against CAPS United, who only trained once last week due to a player strike at the club over unpaid wages.

Despite the chaotic week in the Makepekepe camp in the leadup to the match, it was the visitors who, the visitors who went ahead in the 35th minute through a long-range strike by the league’s top scorer William Manondo.

Manondo’s wonder striker took his goal tally of the season to 15 league goals from 25 matches.

After a slow start in the opening half, Bosso wasted very little time to restore parity in the second half through Devine Mhindirira in the 49th minute before Washington Navaya sealed all three points for the hosts by scoring the winner in the 79th minute.

CAPS United’s hopes of salvaging a point were dashed when defender Marshall Machazane received a red card in the 85th minute.

Highlanders held on for an important win which lifted them to seventh on 38 points from 15 matches and just one point behind fourth-placed Herentals, while CAPS United remained in 12th place on 29 points.

Meanwhile in other matches played on Sunday Manica Diamonds edged Cranborne 2-1 at Sakubva Stadium while Herentals beat Tenax 3-1 at the National Sports Stadium.