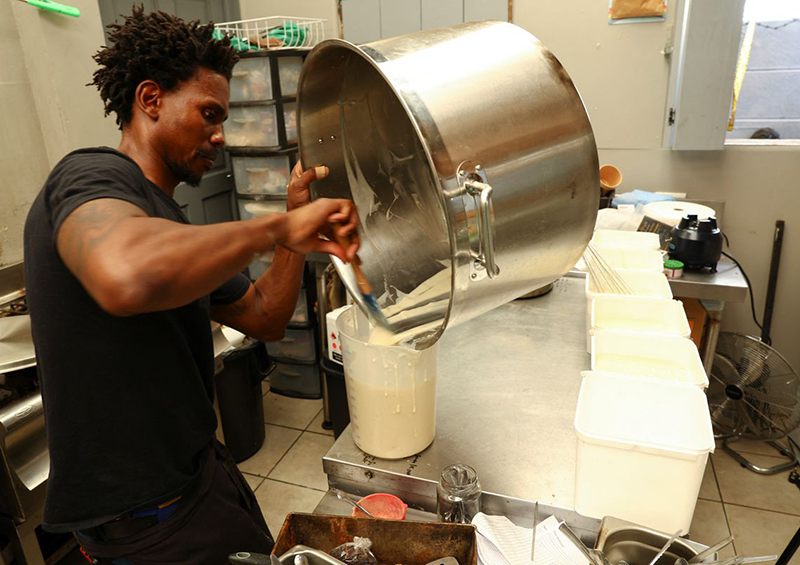 When Tapiwa Guzha first started making ice creams 12 years ago, he never imagined he would one day be whisking pumpkin puree and milk together to make an African flavoured ice cream at a cafe in Cape Town.

Hailing from Zimbabwe, 36-year-old Guzha says he wants to educate locals and visitors alike on African flavoured experiences and correct a narrative that things made in Africa are second rate or are not as tasty.

“At some point it became an aspirational thing to say I don’t eat African food … so I started addressing … that problem,” he said at his Tapi Tapi shop.

Located in the bohemian suburb of Observatory in Cape Town, he hopes to share the different flavours in tubs and cones, and celebrate African food culture, rituals and folklore.

Every flavour he makes has a story behind it.

One such flavour is made from rooibos – a popular tea plant in South Africa – and sweet potato jam.

“It’s quite common in Zimbabwe … to eat tea with sweet potatoes instead of bread,” Guzha says.

People often bring him ingredients from other parts of the continent, he says, who get a free tub of ice cream in return.

Some customers said they found the flavours surprising and heart-warming and were struck by the familiarity of it.

Growing up, customer Clive Sibanda knew ice cream could be vanilla, something that is not native to South Africa.

“Now, if you eat something like samp, something … you grew up eating … it connects you with your childhood,” he said.