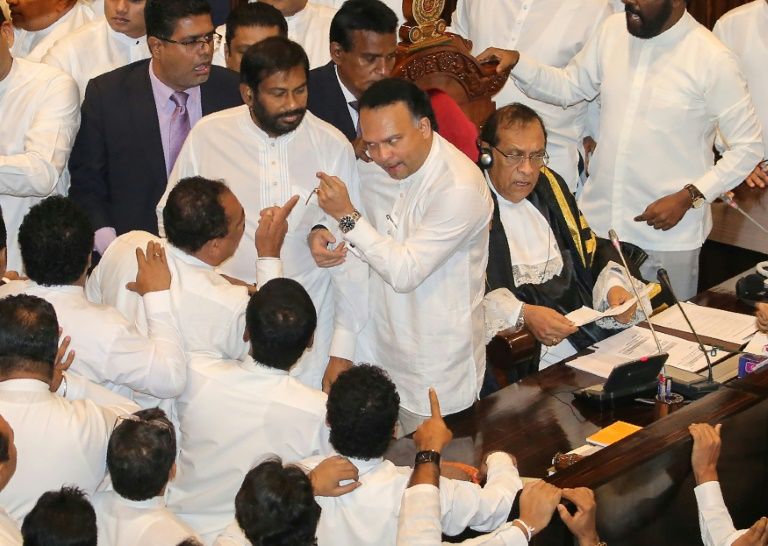 Sri Lanka’s political crisis descended into farce Thursday with MPs throwing punches and projectiles in parliament, a day after voting the disputed prime minister out of office and leaving the country without a government.

Meanwhile, police said tens of thousands of people took part in a rally in Colombo in support of Ranil Wickremesinghe, whose sacking as prime minister plunged the Indian Ocean nation into turmoil almost three weeks ago.

“It was difficult to make out immediately who was hitting whom, but several were hurt, but not seriously,” an official in parliament told AFP. “The speaker adjourned the House till tomorrow (Friday).”

The official said an MP from toppled premier Mahinda Rajapakse’s party injured himself trying to rip out the speaker’s microphone and had to be taken to hospital with a bleeding hand.

However, these moves were suspended by the Supreme Court on Tuesday pending an investigation. Day-to-day administration in Sri Lanka remains paralysed as the crisis drags on.

Thursday’s routine parliament session, the first since Rajapakse and his disputed administration were deposed, began with the speaker announcing that the country now had no government.

“As of now, there is no prime minister, no cabinet ministers and no government in Sri Lanka,” said Karu Jayasuriya, wearing his black and gold robe. “I do not recognise anyone as prime minister.”

The vote ousting Rajapakse and the Supreme Court’s rulings were a major boost to Wickremesinghe.

The four-time prime minister, popular with Western countries for his economic reforms, had refused to leave his official residence after being fired by the president.

Wickremesinghe’s party was also staging a mass rally in the capital later Thursday to demonstrate his public support. Hundreds of supporters were being bussed into Colombo for the rally, party officials said.

Addressing parliament Thursday as an ordinary member, Rajapakse asked the house to end the crisis by holding a national election.

Thursday’s routine parliament session, the first since Rajapakse and his disputed administration were deposed, began with the speaker announcing that the country now had no government

But Wickremesinghe’s party immediately moved a resolution rejecting Rajapakse’s call and demanded a vote that triggered angry protests from legislators loyal to Rajapakse and Sirisena.

Sirisena, who is vested with constitutional powers to induct a new prime minister and a cabinet of ministers, was yet to take note of Wednesday’s no-confidence motion.

On Thursday he accused Jayasuriya of violating legislative traditions, saying the signatures of 122 legislators who opposed Rajapakse had not been certified as genuine and also pointed to a typographical error.

“We don’t need to submit signatures to the President. All he has to do is take notice of the resolution passed by parliament. He need not be a proofreader,” leftist lawmaker Bimal Ratnayake said.

The president also rejected the position that he did not have the power to sack Wickremesinghe and replace him with Rajapakse.

The crisis has alarmed the international community.

Germany’s ambassador Joern Rohde‏ tweeted on Thursday that it was a “bad day for democracy in Sri Lanka… reading about throwing objects at the speaker and preventing votes is unbecoming of a democracy.”

“There is political and economic instability. Our international image has been badly damaged,” Jayasuriya told Sirisena in a letter released to the media.