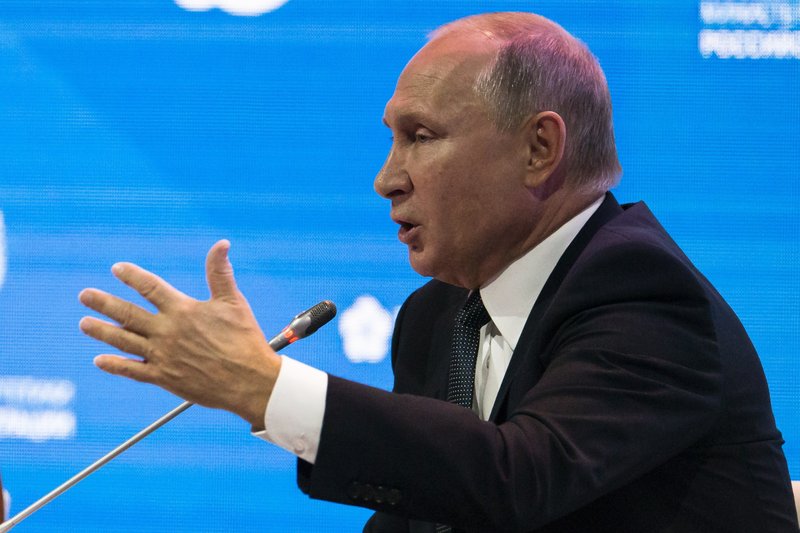 MOSCOW: With a contemptuous grin, Russian President Vladimir Putin on Wednesday called a former double agent who was sickened by a military grade nerve agent in Britain a traitor and “scumbag” — but dismissed the idea that Russia would target him in a poison attack.

Wednesday’s remarks marked the first time Putin directly lashed out at Sergei Skripal, who spent weeks hospitalised with his daughter after both were poisoned in the city of Salisbury in March.

British officials allege the attack on the Skripals received approval “at a senior level of the Russian state,” an accusation Moscow has angrily rejected.

“He’s just a spy, a traitor to the motherland,” Putin said of Skripal during a panel discussion at an international energy forum. “Think about it as a citizen, what would be your attitude to someone who betrayed your own country? He’s just a scumbag.”

Putin reiterated that Russia had no reason to attack Skripal, a former officer of the Russian GRU military intelligence who was sentenced in 2006 to 13 years for spying for Britain. He was released as part of a 2010 spy swap deal and settled in the U.K.

“There was no need for poisoning,” said Putin, himself a former KGB officer. “He was caught, punished, served a total of five years in prison and we let him go. That’s it. He left and went on to consult some special services, and so what?”

He added on a sarcastic note that “espionage and prostitution are among the most important professions.”

Asked about international sanctions on Russia triggered by the March 4 poisoning, Putin denounced what he described as an “information campaign” over the case and said London has stonewalled Moscow’s proposal to conduct a joint probe.

The poisoning further heightened tensions between Russia and the West and triggered a wave of diplomats’ expulsions in which hundreds of envoys were expelled by both Russia and Western nations.

British police say they believe the nerve agent used to poison Skripal and his daughter was smuggled to Britain in a counterfeit Nina Ricci perfume bottle and applied to the front door of Skripal’s house.

More than three months later, the bottle was found by a local man, Charlie Rowley. He was hospitalised and his girlfriend Dawn Sturgess died after being exposed to the contents.

“I sometimes look at what’s going on with that case and just feel puzzled,” Putin said. “Some men came and started poisoning tramps. What kind of nonsense is that?”

After the two suspects were charged, Putin said they were civilians who did nothing criminal and urged them to speak to news outlets. The pair then appeared on Russia’s state-funded RT channel, saying they visited Salisbury as tourists and had nothing to do with the poisoning.

British-based investigative group Bellingcat reported last week that the man identified as Boshirov is in fact Col. Anatoly Chepiga of the Russian military intelligence agency GRU, who was awarded Russia’s highest medal in 2014.

Beyond a photo from Chepiga’s 2003 passport file resembling Boshirov, the report didn’t contain further proof that Boshirov and Chepiga were the same person.

Several Russian and foreign media outlets interviewed unidentified residents in a village where Chepiga’s family once lived, who recognised the colonel as the man caught in CCTV footage in Salisbury.