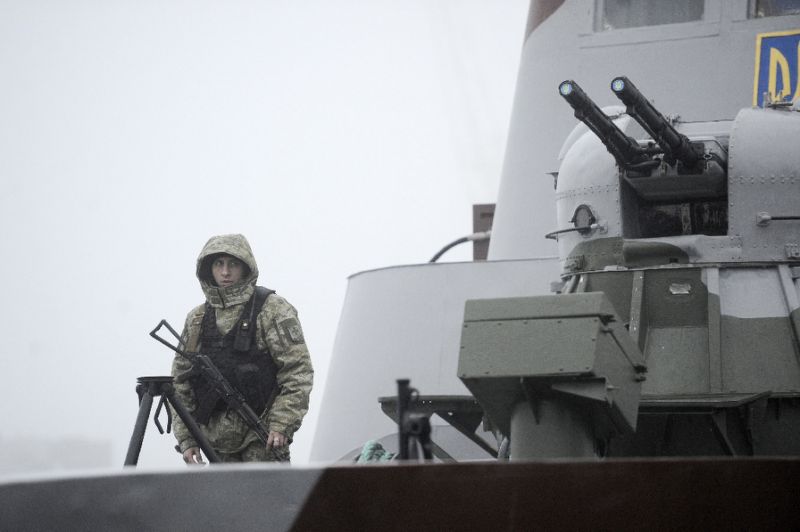 President Vladimir Putin insisted Wednesday that Russian forces were in the right to seize three Ukrainian ships last weekend, but President Donald Trump expressed “deep concern” at Moscow’s actions against a US ally.

In his first extensive remarks since the confrontation at sea on Sunday, Putin said it had been orchestrated by Kiev as a “provocation”.

He said the Ukrainian ships had entered Russian territorial waters and refused to respond to requests to stop from Russian patrol boats.

“What were they (Russian forces) supposed to do?” Putin said when asked about the incident at an international investment forum in Moscow.

Moscow and Kiev have traded angry accusations since Russian navy vessels fired on, boarded and captured the three Ukrainian ships off the coast of Crimea.

After warning of the threat of “full-scale war”, Ukrainian President Petro Poroshenko on Wednesday signed an act imposing martial law for 30 days in regions bordering Russia, the Black Sea and the Sea of Azov.

Western governments have rallied behind Kiev, accusing Russia of illegally blocking access to the Sea of Azov, used by both countries, and of using force without justification.

Trump on Tuesday threatened to cancel planned talks with Putin at this week’s G20 summit in Buenos Aires over the incident.

The White House on Wednesday said Trump and Turkish counterpart Recep Tayyip Erdogan discussed the Ukraine-Russia incident by telephone and “the two leaders expressed deep concern about the incident in the Kerch Strait and the continued detainment of Ukraine’s vessels and crew members”.

The Kremlin said it still expected the Putin-Trump meeting to take place and played down the threat of cancellation, with foreign policy advisor Yuri Ushakov saying: “The meeting is equally needed by both sides.”

The Ukrainian vessels — a tug and two gunboats — were trying to pass through the Kerch Strait from the Black Sea to the Sea of Azov, but were refused access and chased into international waters by 10 Russian vessels.

Kiev has demanded the return of its ships and the release of 24 sailors taken prisoner during the confrontation.

The sailors have been put before a court in Simferopol, the main city in Russian-annexed Crimea, and ordered to be held in pre-trial detention for two months.

Detention orders were made against 15 of them on Tuesday, including three still in hospital, and nine more on Wednesday.

“We condemn this demonstration of barbarism and are multiplying our efforts to bring our boys home,” Ukrainian Prime Minister Volodymyr Groysman said on Twitter after the court rulings.

Sunday’s incident was the first direct confrontation between Ukraine and Russia in the long-running conflict pitting Kiev against Moscow and Russian-backed separatists in the country’s east.

It has raised fears of a wider escalation — in a conflict that has killed more than 10,000 people since 2014 — and prompted international calls for restraint.

Russian military officials said Wednesday that Moscow would soon deploy more of its advanced S-400 air defence systems in Crimea, which Russia annexed from Ukraine in 2014.

One more of the systems would be joining three others already deployed in Crimea, they said.

The Ukrainian parliament on Monday voted in favour of Poroshenko’s request for martial law, which gives authorities the power to mobilise citizens with military experience, regulate the media and restrict public rallies in affected areas.

It was unclear how it would be applied in the border areas and Poroshenko has suggested it is meant essentially as a preventative measure.

The European Union on Wednesday strongly condemned Russia’s actions but, after three days of debate, failed to agree to threaten new sanctions.

“We are dismayed at this use of force by Russia which, against the backdrop of increasing militarisation in the area, is unacceptable,” EU foreign policy chief Federica Mogherini said.

The statement was strongly worded but will disappoint some EU members hoping for a harder joint line, after officials had earlier said the bloc was considering new sanctions against Moscow.

“I think it reflects Washington’s tendency to indulge any and all action taken by the Kiev regime, even inciting them to provocative actions,” Lavrov told reporters in Geneva.

Moscow has suggested that Kiev provoked the incident to boost support for Poroshenko, who is facing a tough re-election battle in a presidential vote set for next March.