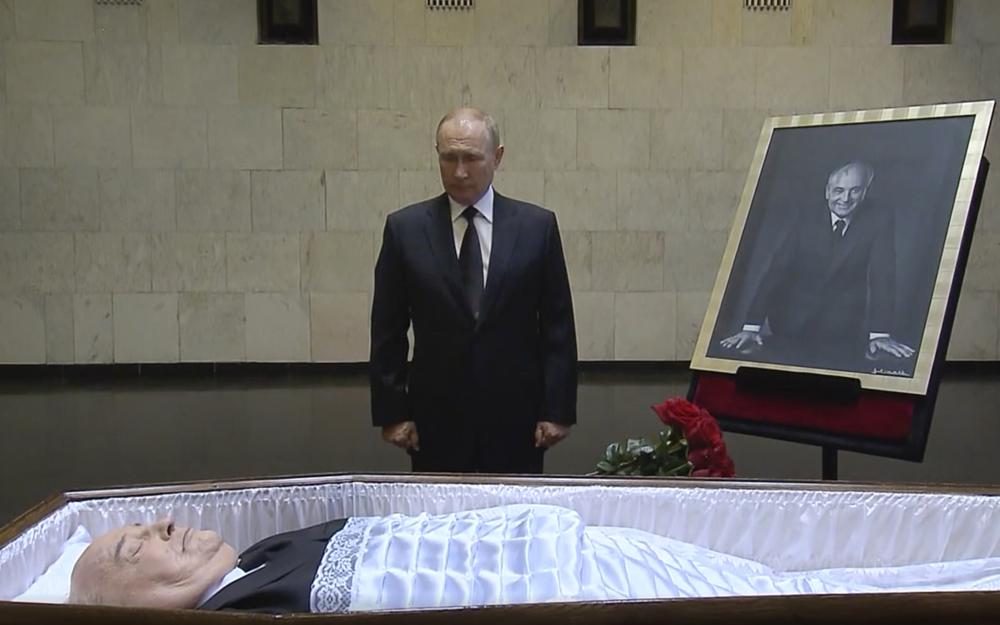 Just before departing for a working trip to Russia’s western-most Baltic exclave of Kaliningrad, Putin visited a Moscow hospital where Gorbachev’s body was being kept before Saturday’s funeral.

Russian state television showed Putin walking to Gorbachev’s open casket and putting a bouquet of red roses next to it. He stood in silence for a few moments, bowed his head, touched the coffin, crossed himself and walked away.

“Regrettably, the president’s working schedule wouldn’t allow him to do that on Saturday, so he decided to do that today,” Kremlin spokesman Dmitry Peskov said in a conference call with reporters.

Gorbachev, who died Tuesday at the age of 91, will be buried at Moscow’s Novodevichy cemetery next to his wife, Raisa, following a farewell ceremony at the Pillar Hall of the House of the Unions, an iconic mansion near the Kremlin that has served as the venue for state funerals since Soviet times.

If the Kremlin had declared a state funeral for Gorbachev, it would have made it awkward for Putin to snub the official ceremony. A state funeral would also oblige the Kremlin to send invitations to foreign leaders, something that Moscow would be reluctant to do amid soaring tensions with the West after sending troops into Ukraine.

Putin’s decision to pay a private visit to the hospital while staying away from Saturday’s public ceremony, combined with uncertainty surrounding the funeral’s status, reflect the Kremlin’s dichotomy about the legacy of Gorbachev. The late leader has been lauded in the West for reforms that put an end to the Cold War but reviled by many at home for actions that led to the 1991 Soviet collapse and plunged millions into poverty.

While avoiding explicit criticism of Gorbachev, Putin in the past has repeatedly blamed him for failing to secure written commitments from the West that would rule out NATO’s expansion eastward — an issue that became a major irritant in Russia-West ties for decades and fomented tensions that exploded when the Russian leader sent troops into Ukraine on Feb. 24.

In Wednesday’s letter of condolence released by the Kremlin, Putin praised Gorbachev as a man who left “an enormous impact on the course of world history.”

“He led the country during difficult and dramatic changes, amid large-scale foreign policy, economic and society challenges,” Putin said. “He deeply realized that reforms were necessary and tried to offer his solutions for the acute problems.”

Sergei Markov, a pro-Kremlin political analyst, observed that Putin’s decision to privately pay tribute to Gorbachev reflected both “security problems and utter unpopularity of Mikhail Gorbachev’s policies.” At the same time, Putin wanted to show his respect to the former head of state, Markov said.

The Kremlin’s ambivalent view of Gorbachev was mirrored by state television broadcasts, which paid tribute to Gorbachev as a historic figure but described his reforms as poorly planned and held him responsible for failing to safeguard the country’s interests in dialogue with the West.

The criticism echoed earlier assessments by Putin, who has famously lamented the collapse of the Soviet Union as the “greatest geopolitical catastrophe of the century.”

On Wednesday, Peskov said that Gorbachev was an “extraordinary” statesman who will “always remain in the country’s history,” but noted what he described as his idealistic view of the West.

“Gorbachev gave an impulse for ending the Cold War and he sincerely wanted to believe that it would be over and an eternal romance would start between the renewed Soviet Union and the collective West,” Peskov said. “This romanticism failed to materialize. The bloodthirsty nature of our opponents has come to light, and it’s good that we realized that in time.”