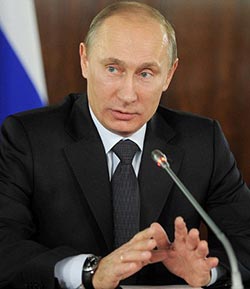 THE price of platinum slid and sister metal palladium sank nearly 3% an ounce on Wednesday after conciliatory words from Russia eased East-West tensions surrounding the conflict in Ukraine.
On the Comex division of the New York Mercantile Exchange, palladium futures for June delivery – the most active contract – in afternoon trade exchanged hands for $798.30 an ounce, down more than $20 and near the day’s lows.
Russian President Vladimir Putin assured NATO and the Pentagon – which immediately expressed scepticism over the claims – that the country had withdrawn its soldiers from the border with Ukraine.
“We’re always being told that our forces on the Ukrainian border are a concern. We have withdrawn them. Today they are not on the Ukrainian border, they are in places where they conduct their regular tasks on training grounds,” Putin said.
The threat of sanctions against Russia over the Ukraine stand-off and a strike in South Africa – together the two countries control 80% of world palladium supply – have seen the palladium price jump by 10% this year.
Russia produces more than half of world supply of the precious metal and has been stockpiling palladium since Soviet days.
In New York July platinum also retreated pulling back to $1,436.30 an ounce, down 1.5% or $21.80 in afternoon trade.
Though not as concentrated as palladium, platinum supply is also largely dictated by Russia and South Africa, which together produce nearly 70% of the global total, followed by Canada and Zimbabwe.
The price of platinum is now back below levels in January before more than 70,000 South African workers went on strike at Anglo American Platinum, Impala Platinum and Lonmin.
Roughly 10,000 ounces of platinum production and 5,000 ounces of palladium are lost each day the strike drags on and the sides appear farther apart than ever.
Platinum group metals are used primarily in autos to reduce exhaust emissions and also as jewellery and in medical devices.
A small deficit is predicted for the platinum market while palladium will remain in undersupply in 2014 for the eighth consecutive year.Advertisement