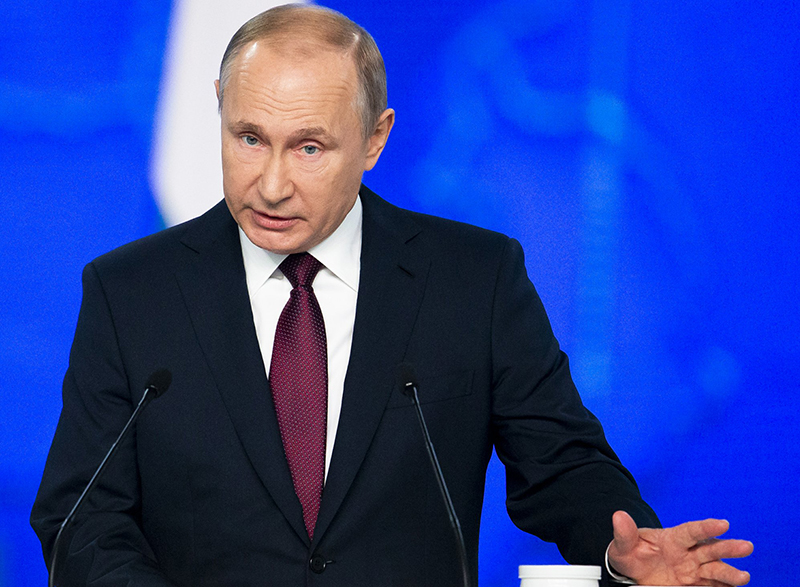 While the Russian leader didn’t say what specific new weapons Moscow could deploy, his statement further raised the ante in tense relations with Washington.

Speaking in his state-of-the-nation address, Putin charged that the U.S. has abandoned a key arms control pact to free up its hands to build new missiles and tried to shift the blame for the move to Russia.

“Our American partners should have honestly said it instead of making unfounded accusations against Russia to justify their withdrawal from the treaty,” Putin said.

The U.S. has accused Russia of breaching the 1987 Intermediate-Range Nuclear Forces treaty by deploying a cruise missile that violates its limits — the accusations Moscow has rejected.

The INF treaty banned production, testing and deployment of land-based cruise and ballistic missiles with a range of 500 to 5,500 kilometres.

The intermediate-range weapons were seen as particularly destabilising as they take shorter time to reach their targets compared to the intercontinental ballistic missiles. That would leave practically no time for decision-makers, raising the likelihood of a global nuclear conflict over a false launch warning.

Putin reaffirmed that Russia will not be the first to deploy new intermediate-range missiles but warned of a quick retaliation if the U.S. puts such weapons in Europe.

“They will only take 10-12 minutes to reach Moscow,” he said. “It’s a very serious threat to us, and we will have to respond.”

He didn’t directly mention the U.S., but noted that the Russian response will be “asymmetrical” and involve new weapons will reach the enemy’s decision-making centres just as quickly.

“Russia will be forced to create and deploy new types of weapons that could be used not only against the territories where a direct threat to us comes from, but also against the territories where decision-making centres directing the use of missile systems threatening us are located,” he said. “The capability of such weapons, including the time to reach those centres, will be equivalent to the threats against Russia.”

The president didn’t specify which of the prospective Russian weapons will do the job, but he reported a quick progress on an array of new weapons presented a year ago.

The Russian leader said the first batch of Avangard hypersonic glide vehicles will be deployed this year. Putin said the development of a vehicle that the military said is capable of flying 27 times faster than the speed of sound was a technological achievement comparable to the 1957 Soviet launch of the first satellite.

He added that the tests of the new Sarmat heavy intercontinental ballistic missile, the Burevestnik nuclear-powered cruise missile and the Poseidon nuclear-powered underwater drone have been progressing successfully.

Putin said the first submarine equipped to carry the Poseidon will be commissioned later this year. Shortly after Putin’s speech, the Defence Ministry released a brief video showing a test of the Poseidon, which can target coastal areas with a heavy nuclear weapon, causing a devastating tsunami wave.

Putin also announced the coming deployment of the new Zircon hypersonic missile for the Russian navy, saying it’s capable of flying at nine times the speed of sound and will have a range of 1,000 kilometres.

He said the Zircon program will not be too costly as the missile has been designed to equip Russia’s existing surface ships and submarines.

Putin added that the military will deploy more Kinzhal airborne hypersonic missiles, which entered service last year. The Defence Ministry said Wednesday the Kinzhal has been successfully tested at a range exceeding 1,000 kilometres against both sea and land targets.

Putin urged U.S. officials to take into account the “range and speed of our prospective weapons” before making decisions that will threaten Russia.

“We are only asking about one thing: Do the count first before making decisions that could create new serious threats against our country and would trigger retaliatory measures,” he said.

While issuing a tough warning to the U.S., Putin also claimed that Russia still wants friendly relations with Washington and remains open for arms control talks.

“We don’t want confrontation, particularly with such a global power as the U.S.,” he said.

At the same time, he criticised what he described as “destructive” U.S. policy of targeting Russia with sanctions.

Russia’s relations with the U.S. have sunk to post-Cold War lows over Russia’s 2014 annexation of Ukraine’s Crimean Peninsula, its support for the Syrian government in the war in Syria and the allegations of Russian meddling in the 2016 U.S. presidential election.

The menacing talk about new weapons and the tough warnings aimed at the U.S. followed a speech that mostly focused on domestic issues.

Putin promised Russians that he would raise welfare payments, improve education and the struggling health care system and remove toxic dump sites from cities. Similar goals have been set before, but the progress has been slow as Russia has been buffeted by economic shocks caused by a drop in oil prices and Western sanctions.