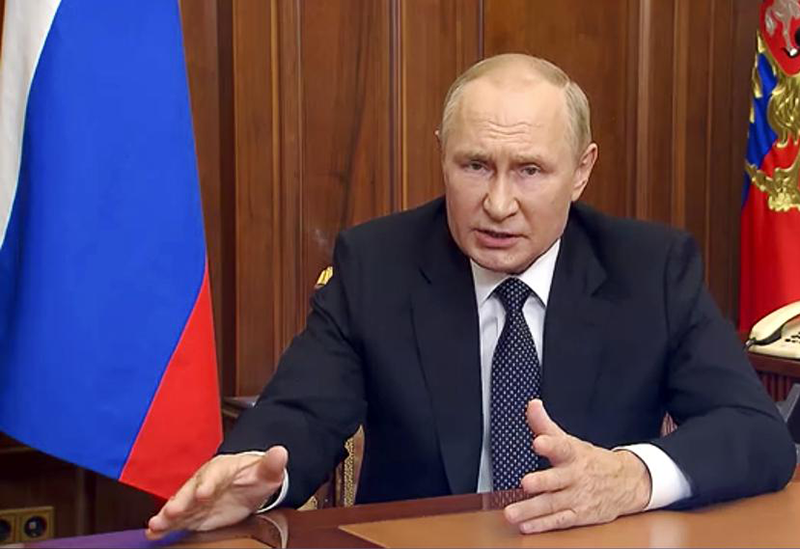 MOSCOW: Russian President Vladimir Putin declared martial law Wednesday in the four regions of Ukraine that Moscow annexed and gave all regional governors in Russia emergency powers that open the door for sweeping new restrictions throughout the country.

Putin didn’t immediately spell out the steps that would be taken under martial law, but said his order was effective starting Thursday. His decree gave law enforcement agencies three days to submit specific proposals and orders the creation of territorial defence forces in the annexed regions.

“We are working to solve very difficult large-scale tasks to ensure Russia’s security and safe future, to protect our people,” Putin said in televised remarks at the start of a Security Council meeting.

“Those who are on the frontlines or undergoing training at firing ranges and training centres should feel our support and know that they have our big, great country and unified people behind their back.”

On Saturday, the Russian Defence Ministry said two men fired at soldiers on a military firing range near Ukraine, killing 11 and wounding 15. The ministry said two men from an unnamed former Soviet republic fired on volunteer soldiers during target practice before they were killed by return fire.

Putin didn’t provide details of the extra powers the heads of Russian regions will have under his decree. However, the order states that measures envisaged by martial law could be introduced anywhere in Russia “when necessary.”

According to the Russian legislation, martial law could require banning public gatherings, introducing travel bans and curfews, and conducting censorship, among other restrictions.

The Russian leader on Wednesday also ordered the establishment of a Coordination Committee to increase interactions between government agencies in dealing with the fighting in Ukraine, which Putin continued to call a “special military operation.”

Prime Minister Mikhail Mishustin, who was named to lead the committee, said it would focus on boosting supplies of weapons and military equipment, conducting construction work and facilitating transportation.

In Russia’s regions bordering Ukraine, authorities plan to tighten security at key facilities and conduct checks of motorists, among other measures, according to Andrei Kartapolov, head of the defense committee of Russian lower house of parliament.