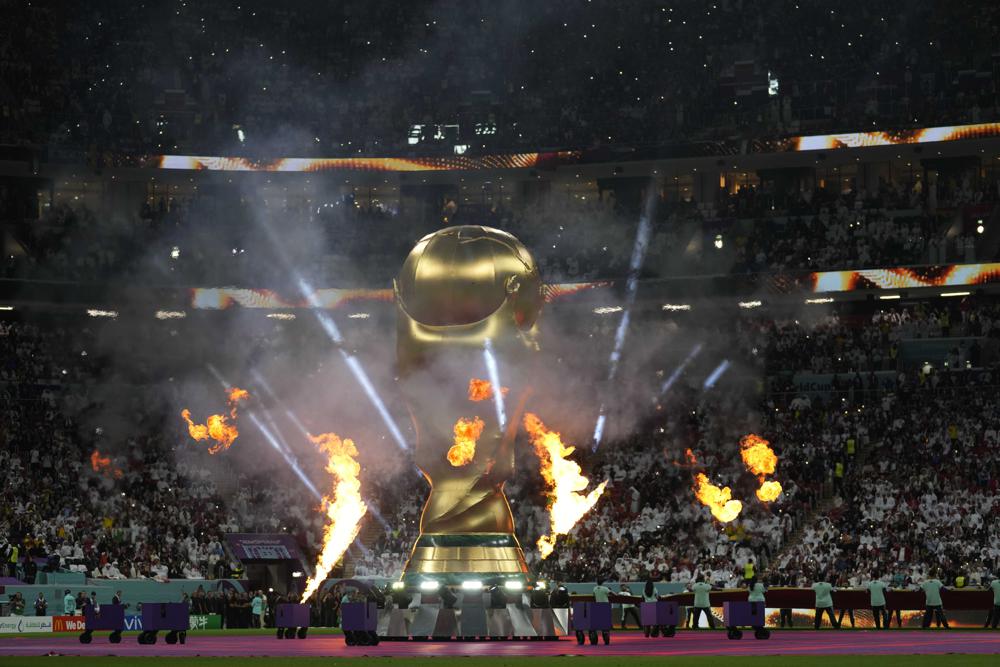 AL KHOR: Oscar-winning actor Morgan Freeman extended one yellow-gloved hand to a FIFA World Cup ambassador suffering from a rare spinal disorder in an image meant to represent inclusion in a country facing international criticism over its human rights record.

It wasn’t the biggest moment of Sunday’s seven-act World Cup opening ceremony ahead of the match between host country Qatar and Ecuador. The largest cheers were reserved for the Mideast and African leaders watching from their luxury suites in Bedouin-tent inspired Al Bayt Stadium.

In fact, it was Sheikh Tamim bin Hamad Al Thani who drew a thunderous applause in a short speech delivered in Arabic from the suite.

“We have worked hard, along with many people, to make it one of the most successful tournaments,” he said. “We have exerted all efforts and invested for the good of all humanity.”

He was seated between FIFA president Gianni Infantino and his father, Sheikh Hamad bin Khalifa Al Thani, who secured the World Cup for the tiny gulf nation 12 years ago.

“How beautiful it is for people to put aside what divides them in order to celebrate their diversity and what brings them together at the same time,” Sheikh Tamim said, his words translated into English on a video screen inside the stadium.

“I wish all the participating teams a magnificent football performance, high sportsmanship, and a time full of joy, excitement and delight for you all,” he continued. “And let there be days that are inspiring with goodness and hope.”

He then said, “I welcome you and good luck to all,” in his only words spoken in English.

Sheikh Hamad, viewed as the moderniser of Qatar during his 18 years as ruler, further delighted the crowd by autographing an official World Cup shirt handed to him by his son. He then held the shirt up to the crowd. 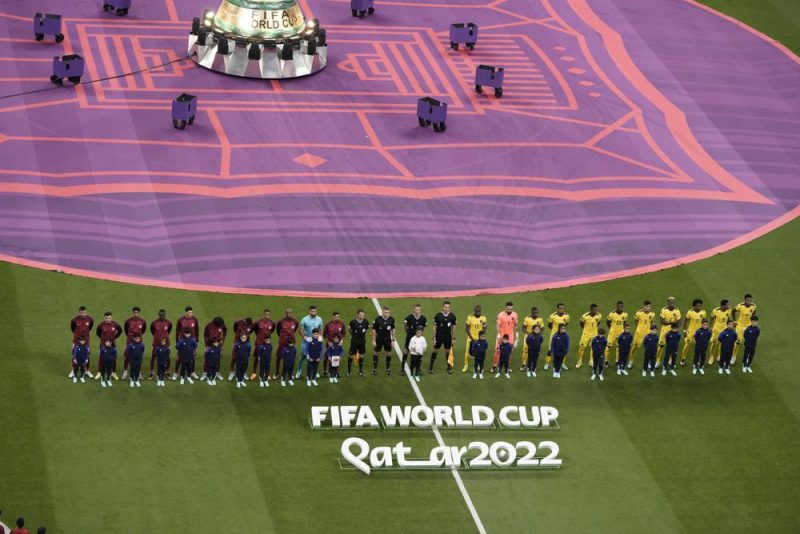 Teams line up before the World Cup group A soccer match between Qatar and Ecuador at the Al Bayt Stadium in Al Khor, Qatar, Sunday

Qatar, home to 3 million people, most of them migrant workers, has spent more than $200 billion on preparation for the World Cup. Seven new stadiums were built, including the 60,000-seat Al Bayt Stadium north of Doha.

The opening ceremony was meant to introduce Qatar to the world through its culture with a theme of “bridging distances.” Creative director Ahmad Al Baker wanted the ceremony to signify “a gathering for all mankind, an invitation to come together as one, bridging all differences with humanity, respect and inclusion.”

“Finally, we have reached the opening day, the day you have been eagerly waiting for,” Sheikh Tamim said. “We will follow, and with us the whole world, God willing, the great football festival, in this spacious ambience for human and civilised communication.

“People of different races, nationalities, faiths and orientations will gather here in Qatar, and around screens on all continents to share the same exciting moments.”

His words hit the mark as Sheikh Tamim was joined in the stadium suite by Saudi Crown Prince Mohammed bin Salman and Egyptian President Abdel Fattah el-Sissi, two leaders who had boycotted Qatar for years. Not present were the leaders of Bahrain and the United Arab Emirates, the two other nations involved in the boycott.

There were no major Western leaders in attendance, as Qatar is under intense scrutiny for its treatment of the migrant workers who prepped the nation for the World Cup, as well as the LGBTQ community. Gay and lesbian sex is criminalised in Qatar.

Kuwait’s crown prince came, along with the director-general of the World Health Organization and Djibouti’s president. Also present was Jordan’s King Abdullah II.

Then came remarks from Infantino, who spoke in Arabic, Spanish and finally English to officially open the tournament.

As “The Business” by Tiesto blasted over the speakers, Qatar and Ecuador took to the field and the World Cup officially began.