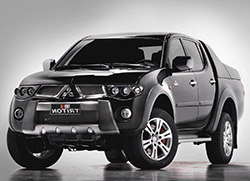 MUTARE-BASED vehicle assembler, Quest Motors says it will start producing Japanese models in the fourth quarter of this year after signing franchise agreements with the manufacturers.
The company, which is holding a five day vehicle exhibition at its factory that commenced on Monday, said it will start assembling Mitsubishi, Toyota and Suzuki truck and sports utility vehicles (SUV) after reaching agreements with their makers.
Quest operations manager Carl Fernandez told The Source that the shipment of the vehicle units have already been finalised but did not say when the agreements were signed.
The company currently holds the franchise for Chinese makes such as Foton, JMC and Chery as well as the German-made BMW.
“We will be introducing a wide variety of vehicle brands, namely Mitsubishi Triton, Pajero Sport, Toyota Revo, and Suzuki Carry. They will be introduced in the fourth quarter but it might be earlier as everything has been finalised,” said Fernandez.
He added that they are already gearing to set up the jigs used to assemble the top-of the-range vehicles.
The luxurious vehicles come at a time when Quest has already started assembling Q-Buses and Foton Tunland.
It also expects to introduce a low cost Chery QQ, Foton Daimler 3,5 tonne up to 30 tonne and tippers by end of July in addition to the 8-tonne dropside body and 3,5 tonne trucks that are already being assembled at the plant.
“The idea here is to try to diversify and give as much variety to our local market as possible,” said Quest director Tarik Adam.
Adam said the assembling plant has capacity to build 10 different models per day.
“We have the space, capacity and skills. What we just need is market commitment especially from government,” he said.
In March this year, the company said it had secured multi-million dollar contracts to assemble and supply a wide-range of vehicles to the government which helped revive its operations.Advertisement