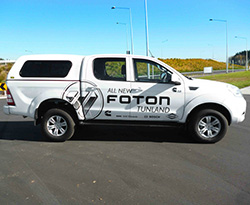 QUEST Motors says it has commenced assembling of Chinese designed buses at its Mutare factory and plans to increase the number of Foton Tunland double cab units which will boost its capacity utilisation to over 50 percent, an official has said.
Quest director Tarik Adam told The Source during a tour of the assembling plant at the start of a five day vehicle exhibition that commenced on Monday that shipment of parts for 10 units of Q-Buses and 24 units of the Foton Tunland have already arrived.
“We have now started the assembling of what we are calling the Quest Bus (Q-Bus). The first bus will take six weeks to assemble.
“It is similar to Zhi-Tong, U-Tong and Higer buses. But the only difference is that the Q-Bus is custom built to withstand the Zimbabwean terrain, it’s all metal and no fibre unlike the other imported buses,” said Adam.
Quest already assembles and holds franchises for various Chinese models, including Chery Tiggo, JMC and Foton. It also holds the franchise for BMW and some Mitsubishi vehicles.
It recently started assembling the Chinese-built, Cummins-powered Tunland double cabs and will later this year start to make single cabs at the plant. It also expects to add other Cherry and Foton models.
Of the Foton Tunland he said: “We want to push our shipment volumes to about 30 to 50 units per month as of next week.”
Quest operations manager Carl Fernandez said the company had capacity to produce 500 buses and 10,000 vehicles per annum.
The assembly of the new models has increased its capacity to over 50 percent, from five percent in 2013 while its workforce has risen to 170 from less than 100 in the same year.
In March, Adam said the company will also start assembling the Foton Daimler 3,5 ton up to 30 ton and tippers during the course of the year in addition to the 8-ton dropside body and 3,5 ton trucks currently being assembled.Advertisement