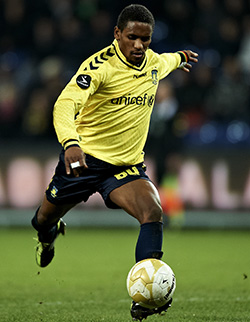 ZIMBABWE international striker Quincy Antipas continues to steal the limelight in Denmark after scoring for his new club Hobro in the Danish top-flight league last weekend.
The former Motor Action and Warriors midfielder, who joined the club at the start of the 2014/15 season, from fellow side Brondby, was on target in the 15th minute against AAB.
However, that lead proved temporary as their opponents levelled matters at the end for the match to finish tied one-all.
The goal was Antipas’ third this season. The Zimbabwean international is now fourth on the scoring charts after 11 matches.
His new club, which won promotion into the Danish top flight league this season, had an explosive start to the new campaign and at one stage stunned all and sundry when they claimed second spot.
However, they appear to be running out of steam as they are now on sixth position on the league table with 17 points, 10 behind log leaders Midtjylland.Advertisement