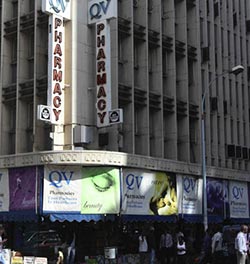 QV PHARMACIES has been placed under provisional judicial management after an urgent application by one of its creditors and faces eviction from its business premises  over rental arrears, according to court documents seen by The Source on Tuesday.
The company is a subsidiary of troubled pharmaceutical group CAPS Holdings.
The application to place QV under judicial management was made by Pulse Medical Care, a pharmaceutical wholesale distributor, saying that the group was failing to honour its obligations.
The High Court granted the application citing Pulse Medical Care, Medivision Holdings, Pharmaceuticals and Chemical Distributors as well as Sky Pharmaceuticals as applicants and QV Pharmacies as respondent.
“Having read the applicant’s founding affidavit, it appears the respondent (QV Pharmacies) is unable to pay its debts due to lack of corporate governance structures and shareholders constantly interfering in the business finances,” read the court document.
“However, the respondent has a large customer base and a potential profitable business which can be resuscitated if managed properly.”
Winsley Militala of Petwin Executor and Trust Company has been appointed provisional judicial manager, effective this month, while the court ordered QV and any other interested party to show cause to the court why an order should not be made with regards to the appointment of the judicial manager (JM) among others when it sits to review the case on April 3 this year.
In its affidavit, dated January 8, Pulse Medical Care, which is owed $96,000, said QV had also defaulted in payment of rentals and was recently served with a notice of eviction at one of its five branches at Robinson House in Harare.
“Although respondent operates a lucrative business of trading in medicinal drugs, currently its liabilities exceed its assets and respondent has no means to pay the rental arrears. Legal proceedings and eviction are therefore imminent,” read the affidavit.
QV has five branches, three in Harare at Robinson House at the corner of Kwame Nkrumah and Angwa Street, in Newlands and Sam Levy Village while the other two are in Bulawayo.
In the affidavit, Pulse Medical Care appealed for QV to be placed under judicial management saying it would enable proper reconciliation of the assets and liabilities of the company and ensure that it reaches its full potential.Advertisement

“In this particular regard, mention must be made of Mr Fred Mtandah, the ultimate major beneficial shareholder of the respondent and his use thereof as a personal cash register to the prejudice of creditors,” reads part of the affidavit.
“It is the applicant’s (Pulse) prayer that the respondent be place under provisional judicial management to prevent further mismanagement and shareholder meddling so that respondent can trade out its current difficulties and become a successful concern.”
QV is partially owned by former Zimbabwe Stock Exchange-listed pharmaceutical giant CAPS Holdings which collapsed three years ago due to undercapitalisation, massive debts and allegations of mismanagement.
Mtandah, CAPS’ board chairman and controlling shareholder, was not immediately available to comment.