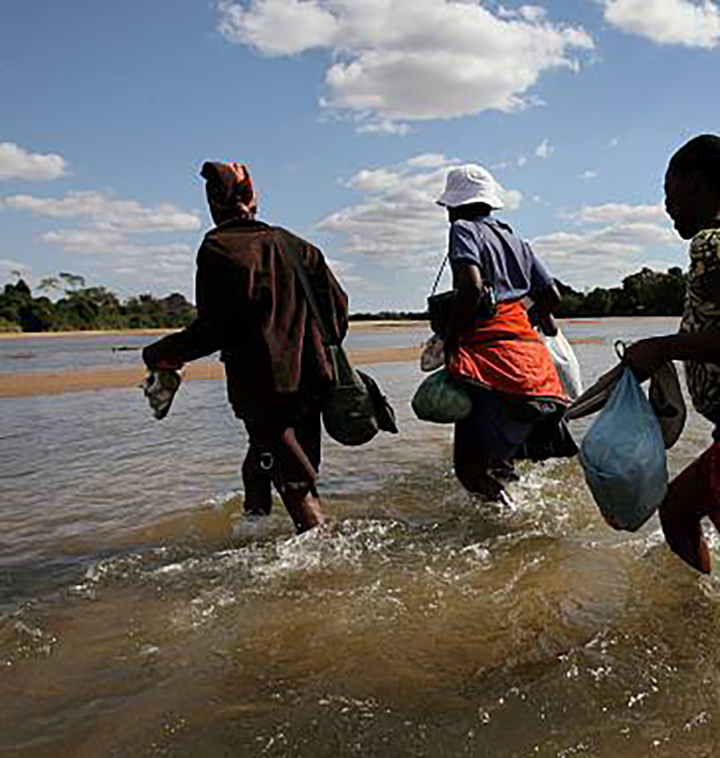 When Sarah Mpofu* made the decision to leave her home in Zimbabwe and seek a better life in South Africa in 2009, the only thing standing in her way were the fast-flowing waters of the Limpopo River.

After the 38-year-old heard many stories about people drowning in the river, which runs for about 260km along the border between Zimbabwe and South Africa, there was no way she could not be scared.

Mpofu came into the country just a year after the deadly xenophobic attacks in 2008, during which more than 60 people were killed. However, this and the possible risk of losing her life to the Limpopo River did not deter her ambitions of having a better life.

Her goal? To enter the country at any cost and to find a job and provide for herself and her children, who live with family back home. But she had no passport.

“Opportunities had dried up in Zimbabwe and I needed to find a job to support my family,” she said, adding:

I waited a good month before I embarked on the dangerous journey because I needed assistance from those who knew what it entailed.

“I spoke to a transporter the first time and he told me to wait a bit, so I started preparing myself. About a month later, he returned to my area and he told me he would charge me R1 500 to transport me from my village, Lupane – in the Matabeleland North province of Zimbabwe – to just before the Beitbridge border, where my journey would begin.”

Her village is about five hours away from the border.

According to Mpofu, the man she had spoken to was a known transporter of goods and people between Zimbabwe and South Africa.

She told City Press that financial constraints almost brought her trip to an end before it had even begun. However, she found an alternative way to pay the transporter: “I had two goats which I gave to him and that is how I paid him.”

She recalled eagerly anticipating his arrival on the night of her journey:

I remember we arrived at Beitbridge at about 11pm on a Friday night. We drove from Lupane, past Bulawayo and headed straight for Beitbridge, and when we got to the river ,there were other people there also prepared and ready to take on the hefty river.

The journey to Beitbridge included passing through several security checkpoints, where bribes had to be paid to soldiers and police at each stop.

”I am not quite sure of the finer details because the gentleman transporting us handled it. I am not even sure about what time we got to the South African side of the border. All I know is that when we began crossing the river it was dark and by the time we were on the other side, the sun was beginning to rise.”

I remember this rush of fear almost consuming me. It seemed like with every step I took into the river, the deeper it became.

She shared how prior to beginning the scary journey through the Limpopo River, she and her fellow travellers first had to sit and hide in the bushes until those who had previously made the journey and those leading the expedition were sure that it was safe to proceed into the water.

According to the Zimbabwean national, not only was the river deep, it was icy too.

I remember the thought of death crossing my mind as the cold water reached my neck at one point.

However, her desperation outweighed her fear and there was no turning back.

”About an hour later, I think, I am not sure, I had managed to evade drowning and possibly being attacked by crocodiles, and had made it to the South African side.”

Over the years, she has visited her family in Zimbabwe at least three times and has had to cross the river each time.

She said she had never had issues when making her way into Zimbabwe, as she simply tells officials that she is going back home, never to return.

”The last time I went home was in April this year. So, I am not sure what will happen if I try to exit South Africa again,” she said.

ON THE OTHER SIDE

Wet, cold and tired, that is the only way I can explain how I was and felt after crossing the river.

”We then began our slow, careful walk through bushes on the South African side in an effort to get to the Shell garage, where my transport was waiting for me.

”We were lucky enough not to come across South African law enforcement or security officials, as that would have required me to fork out money so as to be able to continue with my journey.”

According to another transporter, Given Mujuru, there are three possible routes undocumented immigrants use when embarking on their illicit journey, explaining that each of these routes is safer than crossing the Limpopo River.

“Mostly, it is people who are unable to or avoid paying bribes who opt to cross the river.”

Mpofu confirmed this, saying wading through the river was the only way she could cross over to South Africa as she had no cash.

After almost 24 hours, Mpofu arrived in Yeoville in Johannesburg, a place she has called home since.

Mpofu has been working at the same shop she found work in when she first arrived in South Africa, and she takes up piece jobs as a cleaner.

”My job at the shop pays me R1 700 per month and I can get about R300 per cleaning job. But these are not always definite,” she explained, adding that R500 of her wages is used for rent, while she sends the rest home as cash and as grocery items every month.

Sometimes I end up approaching loan sharks to get money because after all this, I am not left with much, but at least I have done something for those back home. I would rather be here earning the R1 700 than go back home because there is nothing there. Our farms are dry and livestock are dying. What will we do there? There is no money. The money there has no value.

*Not her real name