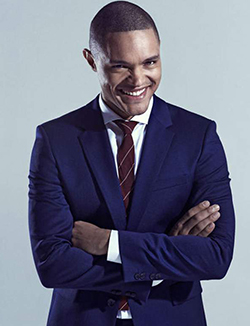 IN a Johannesburg bar with peeling velvet wallpaper and a grimy carpet, a new generation of South African comedians line up dozens of borrowed wooden chairs to turn the dance floor into a makeshift comedy club that they are hoping might produce the next big name in world humour.
The elevation of South African Trevor Noah to the exalted throne of Comedy Central’s “The Daily Show” has inspired this nation’s comedians who over the last two decades have used their unique history to turn apartheid and race issues into punchlines.
News that Noah will in September replace Jon Stewart on “The Daily Show” was like “comedy New Year,” said comedian Robby Collins a lanky, tattooed comic who has opened many of Noah’s South African shows.
“I think a lot of guys have (since) visited the U.S. Embassy,” he added with a laugh.
Collins, 28, moved to Johannesburg from the coastal city of Durban five years ago, and was spotted by Noah, who already had his own late-night South African television show and lucrative sponsorship deals that plastered his face on billboards across the country.
Noah’s “Daily Show” ascendancy is an affirmation to other South African comics that they, too, can resonate with a global audience.
“Whenever someone you recognize yourself in breaks through the glass ceiling, it changes your ambition,” said Mojak Lehoko, 28, a wry comic and one of the hosts of the weekly comedy show at Kitchener’s, a tattered bar in an old hotel that is seeing a rebirth as a hipster hangout.
The contrast for now is quite stark and these comedians are a long way from the swank theatre across town where Noah is in the midst of a sold-out three-week run in what may be his last show in South Africa for a while.
In his act, he jokes about being the new guy on the red carpet for the New York Met Gala and boarding international flights as an African during the Ebola outbreak.
A biracial South African, he still hits on race as a topic, like these undiscovered comedians in Johannesburg’s less tony establishments.
In the cramped room at Kitchener’s, named after the British colonial lord and filled with hip twenty-somethings, budding comedians throw out quips about race and ethnicity along with observations about life in South Africa.
A young white man in the front row is teased by Collins for trying to use black slang.Advertisement

Another joke plays on white South Africans’ unfamiliarity with the nation’s African languages.
One diminutive black comedian said he intimidates beefy whites by aggressively shouting “I like potatoes” at them in the Xhosa language.
White South African comedian Arieh Esra described his recent university graduation, contrasting his parents’ polite applause with the wildly enthusiastic ululations of black parents.
Esra said the difference was understandable because whites have a “400-year head start” in celebrating graduations, while blacks for the most part weren’t allowed into universities for centuries.
Lehoko, who has taken his act to international stages, said race is often shorthand for social differences, whether in South Africa, the United States or many other places.
“Race is a global issue,” he said.