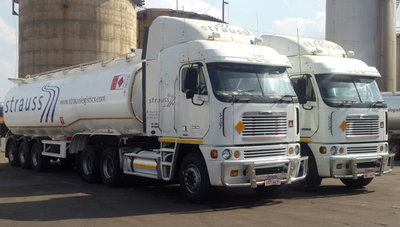 THE Chief Executive Officer of one of Africa’s leading fuel supply and distribution companies, Strauss Logistics Zimbabwe, has been caught up in racism storm for calling his black employees ‘lizard skinned’,
NewZimbabwe.com has learnt.

The allegation has created tension between Adrian Smuts and his employees, who are mainly truck drivers.

It is also alleged that the workers are not being paid and have lost all labour cases against their employer who allegedly brags about being “connected, and that no one will touch him”.

“He threatens people because he had links with the late President Robert Mugabe, links which keep him afloat to date and he calls blacks lizard skinned people,” said an employee who requested to be anonymous.

“Adrian is former boss at Sabot, Pioneer Transport and Green Fuels …his history is firing people when they go on strike.

“It is strange that Justice Godfrey Musariri, the Labour Court judge, has always been regular on all cases that Adrian forwarded to his court at all those companies he had worked for.

“Why Musariri at Sabot, Pioneer and Green fuels and now Strauss Logistics?”

In June this year, the workers embarked on an industrial action but the move has turned sour for them after the same judge granted Smuts permission to punish his employees for embarking on the job action.

Smuts, through his company, is cited as the applicant documents seen by NewZimbabwe.com, rushed to court challenging the strike arguing that it was illegal.

The matter was handled by Justice Musariri who, according to the employees, controversially handles all labour disputes between them and their employer.

Smuts argued that the job action failed to comply with the requirements of section 104 of the Act which requires a
14-days’ notice of the job action, a vote by the employees and conciliation of the underlying dispute.

The judge ruled in favour of Smuts, stating that “the respondents (workers) did not dispute their failure to comply with the stated requirements”.

The chairperson of the workers committee had deposed an affidavit on behalf of the employees challenging the labour court action by the employer.

He told the court that he was unfairly stopped from driving his truck together with the committee’s secretary.They were put on suspension pending disciplinary hearing.

They communicated their displeasure in writing but started receiving calls from “strangers claiming to be from
the Office of the President and Cabinet and the number which called was registered in the name of one Jacob Mupeti.

“On the night of 11th and 12th, the workers committee secretary and I survived kidnapping from unknown
people who visited our residence.

“These incidents were reported to the Zimbabwe Republic Police under reference 0131149/22 Kuwadzana for myself and 013801/22 Norton for the secretary,” he told court.

At the time of the court hearing, the secretary general’s whereabouts were unknown following his disappearance on June 22 after meeting at Strauss Logistics premises.

The judge ruled it was not clear who had kidnapped the committee members.

“Respondents did not dispute that they failed to comply with the mandatory requirements for lawful strike set out by subsections 2 and 3 of S104 … the applicant is hereby authorised to take disciplinary action against the respondents who disobey the terms of this order and each party shall pay its costs,” ruled the judge.

Last Friday, over 200 drivers were called for a disciplinary hearing over the industrial action after the
company was given permission to punish the employees.

The workers were, however, aggrieved that a new workers committee was selected when the
current one had not been dissolved.

“We are still going through some processes at our company,” he said.

Asked what the process was, Machigere said, “You might not need to know about that.”

Efforts to get a comment from Smuts were in vain as his mobile was unreachable. He did not respond to text messages sent to his mobile phone.