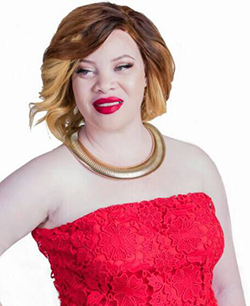 LONDON: Charismatic, vivacious and beautiful are just a few words to describe this year’s Zimbabwe Achievers Awards (ZAA) hostess and, this weekend guests will get a chance to interact with the multi-talented TV and radio personality as she leads the event in London.
Candice Mwakalyelye, known to many as NdiCandice jetted into the country in April ahead of the Y2K SAMA festival, and says she is ready to make the 7th  ZAA anniversary a memorable one.
“I am thrilled to be hosting the Zim Achievers Awards this year, as it is an amazing opportunity to connect with those changing the narrative abroad,” she said.
“I am also looking forward to celebrating milestones with the various individuals being honoured on the night and, of course, having a splendid evening with everyone.”
“I love interacting with my audience and all I can say is, bring your dancing shoes too because we are going to celebrate in style,” she added.
A voice over artist, brand ambassador and newscaster, Mwakalyelye’s broadcasting career began in Tanzania in 2006, working as an on-air personality for East Africa Television Ltd.
In 2011 she moved back to Zimbabwe to build on what she was already doing. She joined the ZiFM team in 2012 and quickly rose in the ranks as the news & business anchor, and then social media manager.
The Mutare born beauty has also received several accolades and in 2015 won the Media Professional of the Year award at the Zimbabwe Women’s Awards (ZIWA).
Well known for her signature blonde hair and luscious red lipstick, Mwakalyelye has hosted events such as Unplugged Zimbabwe, the Zimbabwe Film and Television Awards (ZFTA) and Zimbabwe Music Awards (ZIMA).
She has since left ZiFM but her strong social media presence has resulted in several brand endorsements, including Senditoo, Make up by Gamu and DeeKawZee accessories.
This year’s awards gala is set for the Guoman Cumberland hotel which is a stone’s throw away from the popular Oxford high street and the British Museum.
The Zimbabwe Achievers Awards began in 2010 with the aim of recognising and celebrating Zimbabweans excelling in the UK, in fields that include business, arts and culture and, has since become an important community fixture on the Zimbabwean diaspora calendar.Advertisement

The brainchild of Founder and Chairman Conrad Mwanza, the brand has gone on to become a household name around the world and is now present in several countries, including the United States and South Africa, with the Australian version launching nominations shortly after the UK edition.
Tickets have now sold out, however to make enquiries about the event visit www.zimachievers.com/uk or contact info@zimachievers.com.