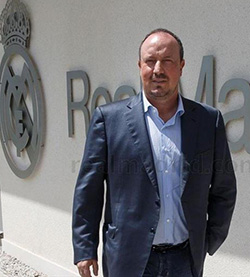 RAFAEL Benitez has promised Real Madrid fans that the club will sign new players during the close season – but admits it will be difficult to improve the quality of the squad.
The new Los Blancos coach has also rubbished media reports on Sunday that claimed there was a rift between him and the club’s leading players insisting that every player is willing to listen and adapt to his fresh plans.
Manchester United have been linked with a move to Madrid and Spain defender Sergio Ramos, but that also appears to have been blown out of the water by the former Liverpool coach Benitez, who has named Ramos as a figure central to his plans.
Some reports suggested world player of the year Cristiano Ronaldo wanted to operate in a more central role with Bale demanding to be deploying behind a roaming front three.
In his first interview since succeeding Carlo Ancelotti as coach, Benitez heaped praise on the attitude of Ramos, Iker Casillas, Cristiano Ronaldo, Gareth Bale, Pepe and Raphael Varane.
“As we said before, my backroom team and I have been following the players and have been in contact with them from the first moment, ” said Benitez on realmadrid.com
“So, firstly I have to say that the attitude to their work that they’ve all shown me, Sergio, Iker, Cristiano, Bale, Pepe, Varane, everyone, has been excellent.
“The first thing I’ve done is listen, find out what went well and not so well last year, their impressions, what in their opinion could be improved and what they’d like to be done.
“I’ve done the same with all the technical staff and professionals at the club and, with all that information, once all together we’ll decide what’s best for the team and for every one of them.
“They’ve all shown a very good attitude to their work and I’ve conveyed to them that the technical staff will be there for them for anything they need.
“In fact, we’re in contact with the injured players to gain all the time we can before training starts. In terms of who’ll play and where, as I said, we have to get together, train together, and then we’ll decide.
With Madrid bringing in Brazilian Danilo for around £31.5 million Euros and his compatriot Casemiro from Porto – Casemiro returns from a loan spell – Benitez says the work continues to ensure Madrid are in the condition he wants them to be as they prepare for a major assault on Liga and Champions League riches.Advertisement

Madrid finished second behind Barcelona in Liga and lost a Champions League semi-final to Juventus, outcomes that cost the unfortunate Ancelotti his job by the club’s demanding president Florentino Perez a year after he coached them to Champions League success.
Madrid have been linked with moves for the Manchester United goalkeeper David De Gea and are apparently interested in bring Juventus and France midfielder Paul Pogba to the club.
“Of course. Danilo and Casemiro, for example, are players who are going to be important and the club is working every day to try to raise the level of this team with the odd signing that can help us to tackle the challenges ahead of us, but let me say that improving the current Real Madrid squad is immensely difficult,” said Benitez.