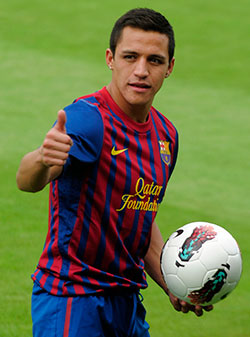 THERE are many examples of players who have shrugged off the poverty of formative years to become household names but Chile forward and new Arsenal signing Alexis Sanchez can point to a background that was about as tough as they come.
Born in Tocopilla in Chile’s northern mining region, a grim port city dominated by a gigantic power plant and a saltpeter processing facility, Alexis barely knew his father and was raised by a mother who scraped a living as a cleaner at her son’s school.
Like many of his peers, all Alexis wanted to do was play football but he had to take odd jobs like cleaning cars while still at school to supplement the family income.
His talent shone through from an early age, earning him the nickname “El Nino Maravilla” (Boy Wonder), and he quickly realised football offered a way out that would also allow him to help his mother and family.
“When I was a kid my mother was working and I didn’t like it that my mother was working,” Alexis said in a recent HBO short film chronicling his life.
“When she was cleaning in the school I hid because I didn’t like to see her there,” added the 25-year-old.
“If I had not become a football player I would probably have ended up working in the mine, or doing something else, something tough, but I would have done something.
“I wanted to triumph as a footballer to help the family and the people of Tocopilla.”

Blessed with exceptional pace and ball control, Alexis is at his best when running at defenders down the right, either cutting inside to shoot or darting to the byline and sending over dangerous crosses.
He made his professional debut for local club Cobreloa at the age of 16 before Serie A side Udinese recognised his potential and snapped him up.
Udinese initially loaned him to Chilean club Colo Colo before he spent another season on loan, this time at River Plate in Argentina under current Atletico Madrid coach Diego Simeone.
The Italian club finally recalled him at the age of 19 and after a couple of seasons adapting to life in Europe he exploded during the 2010-11 campaign, prompting Barca to pay 26 million euros to secure his services.
However, he never fully won over the demanding Nou Camp fans and although he produced moments of brilliance, such as a superb lob against Real Madrid in October’s ‘Clasico’, he has lacked consistency.Advertisement

While he had to compete for a place in the Barca attack with the likes of Lionel Messi, Neymar and Pedro, Alexis is the undisputed leader of the Chile forward line and has 24 goals in 71 appearances for La Roja – including strikes against Brazil and Australia at the recent World Cup.