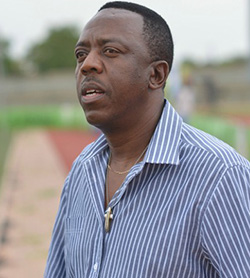 AFTER surviving relegation by a whisker, Castle Lager Premiership side How Mine are set to appoint triple-title winning coach Rahman Gumbo as head of their technical department at the end of the season.
Gumbo was fired at Botswana side, Gaborone United, early this month after a string of poor results and will relish an opportunity to return home once again.
How Mine, owned by Metallon Gold Zimbabwe, fired coach Luke Masomere two months ago and replaced him with Jeremiah Makota, but have not won in 11 matches.
They have 34 points from 29 matches going into the last round of matches this Sunday where they face Chapungu at Ascot.
While How Mine chairman Alpha Matumbura says they will wait until the end of the season to announce technical changes, sources claim Gumbo’s deal is done.
“Like we said when the current technical team took over, we will wait until the end of the season and make a wholesome review of what transpired in 2015,” said the chairman.
“The two coaches (Makota and Sheunesu Chaka) were given the responsibility to take the team to the end of the season and we cannot be seen to be going back on our word.
“In any case, we have not been relegated and we have time on our hands to make relevant changes at the end of the season.
“It’s not easy to just appoint a coach, there are processes that have to be followed through.”
But sources indicate the deal has been completed and Gumbo, who was not reachable for comment, has been given a three year contract.
“He will take over effective January 1, they have reached a deal and unless something dramatic happens, then Rush is their new coach,” a source close to the developments said.
League winner
Gumbo won the league title twice with Highlanders, once with MTL Wanderers in Malawi before another league triumph with Township Rollers in Botswana, making him a highly sought after coach.
On his return to Zimbabwe in June 2011, he took over at FC Platinum, replacing the late Benjamin Moyo who had passed on in a tragic drowning incident in Shurugwi.
Gumbo pushed Platinum to the brink of a debut league title but was pipped on the last day on goal difference by Dynamos after both teams had finished on 58 points.
Masomere, a league winner with AmaZulu in 2003, had appeared to assemble a ‘killing machine’ at the start of the season, but the results simply failed to come. And as it turned out, the majority of his players were past their sell by date.Advertisement