A TOP South African politician, businessman and peace consultant says President Cyril Ramaphosa will not be too “stupid” as to allow South Africa to regress into another Zimbabwe.

“When it comes to the president (Ramaphosa),” said Meyer, “in my view, he is well-suited for the job for two reasons; one is he is a modellist and, second, he is a constitutionalist”.

“What I mean when I say he is a modellist is that he will never allow this country to follow the example of Venezuela, Cuba or Zimbabwe. Full stop. That’s it.

“He will not because he’s a modellist, he understands that any thinking that would align South Africa with those countries within that space would just be stupid.”

Originally a member of the National Party, he is known for his prominent role in the negotiations to end the apartheid system in South Africa.

He added, “He would rather like to see South Africa grow as a country along the lines of what Japan did after World War II or Germany did after unification or China did in the last three decades, and I think that is where he finds himself right now.”

Zimbabwe is battling to tame a surging inflation that has seen prices increase almost on a daily basis, raising fears the country could go back to the 2008 hyper inflationary period that saw a record 230 million percent inflation, according to the last official count.

The southern African country has also had questioned raised about its democracy.

Some Venezuelans are expressing scepticism about new banknotes that their government says will ease challenges posed by the country’s soaring inflation.

The Cuban political system is also normally described as undemocratic by human rights groups and academics and is usually classified as a dictatorship, one-party state or an authoritarian or totalitarian state. 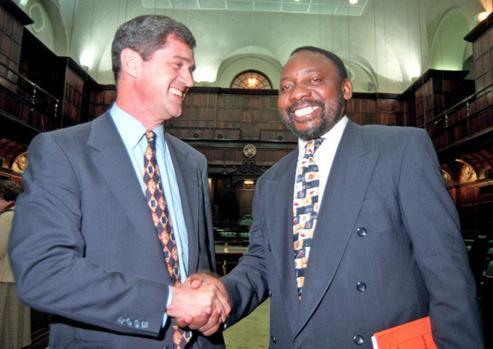 Meyer and Ramaphosa some time ago