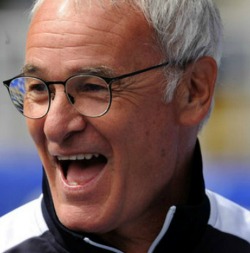 LEICESTER City’s Premier League title triumph will be hard to repeat because the richest teams almost always succeed, says manager Claudio Ranieri.
Leicester’s squad was asse,mbled for £57m the cheapest of any currently in the top half of the Premier League.
“Big money makes big teams and usually big teams win. Now we can say only 99% of the time,” said Ranieri.
“Next season will be the same and for the next 10 or 20 years, it will be the same.”
Ranieri suggested a surprise title winner only comes along roughly once every 20 years, pointing to the examples of Nottingham Forest in 1978 and Blackburn Rovers in 1995.
Forest won the league a year after finishing third in the second tier, while Blackburn, themselves heavily backed financially by Jack Walker, were champions three years after winning promotion to the Premier League.
“How many years after Nottingham Forest and Blackburn have another team won?” said the Italian. “The richest, or the team who can pick up the best players to make a team, will win.”
Leicester are owned by Thai billionaire Vichai Srivaddhanaprabha, who spoke in 2014 of his readiness to spend £180m to secure the Foxes a top-five finish in the Premier League within three years.
Next season, they will receive between £99m and £150m in prize money as a new TV deal worth £5.136bn over three years begins.
Ranieri’s argument, though, is other clubs in the Premier League still have more money to spend on players.
“Maybe now is too early to think what we have done,” said the 64-year-old. “Maybe in one or two years it will be easier to understand, but now it is important to stay high in the world.”
Still, Ranieri does not believe the Foxes’ Premier League rivals will have an easy job taking his stars away from the King Power Stadium.
“My phone will ring this summer but I will say: ‘Do you have enough money to buy my players?’ I would like to maintain all of them,” he said.
“But if one of my players says to me, ‘I want to go there’, I try to keep him. If you go away you don’t know what happens, here you are the king.”
And the former Chelsea boss said he will not rush into spending big money on a squad that faces a first Champions League campaign.
“We don’t need superstars, we need our players,” said Ranieri. “I want to improve the squad without big stars but the right players.”Advertisement

Leicester, champions of England for the first time in their 132-year history, will receive the Premier League trophy after Saturday’s final home game against Everton.
New snooker world champion Mark Selby wants to join the club’s open-top bus parade after missing the moment they clinched the title because he was winning his second crown.
When Leicester won the Championship in 2014, Selby missed the team’s bus parade through the city because he was beating Ronnie O’Sullivan to become world champion for the first time.
“They had the open-top bus tour on the day of the Crucible final but I hope they can hold it back for me this time and I can be on there with them,” he said.
Selby has revealed the part Leicester’s England striker Jamie Vardy played in his potting success, encouraging him to overcome Marco Fu in the semi-finals.
“He was texting me through the semi-final, saying ‘good luck’ and hopefully I’ll get a few more messages from the boys,” said Selby.