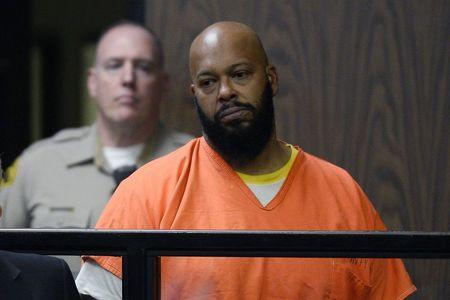 MARION “Suge” Knight, the impresario of gangster rap, has long been a perpetrator and victim of the violent life he promoted in song.
Last Friday, he was portrayed as both.
Sheriff’s deputies booked the former hip-hop music mogul on suspicion of murder after they said he hit and killed a man with his pickup truck, injured another and then fled. His lawyer said he was an innocent victim who accidentally ran over his friend and the other man as he tried to escape an attack.
The incident was the latest in a long line of brushes with death and the law for the 49-year-old founder of Death Row Records, one of the genre’s leading labels.
Knight started the label that helped solidify West Coast rap with Dr. Dre, who had been a member of the legendary group N.W.A. The label also launched the career of Snoop Dogg and had Tupac Shakur in the last months of his life.
The fatal incident occurred a short while after Knight was told by deputies to leave a film location where he had argued with someone, authorities said.
The cast and crew were taking a break from filming a promotional video for the biopic “Straight Outta Compton,” about the rise of N.W.A., according to a person familiar with the project who was not authorized to speak about it publicly and spoke on the condition of anonymity.
The argument resumed and escalated a short while later at a fast-food restaurant about two miles away, with Knight and the man exchanging punches through his open window. Knight then struck the man and a friend with his vehicle and fled, said sheriff’s Lt. John Corina.
Terry Carter, 55, Knight’s friend who authorities do not believe was involved in the altercation, died at a hospital, Corina said. The other man was identified by his manager as Cle “Bone” Sloan, 51, an actor and film consultant. He was hospitalized in stable condition, said manager Jermaine Shelton.
Corina said Knight backed up his pickup truck and knocked Sloan down.
“Then he puts the truck in drive, drives forward, running over him, and then keeps going forward and keeps on driving, and runs over Carter, who is standing in the parking lot, and keeps on going after that,” Corina said.
He said witnesses told investigators it looked like an intentional act.
Defence attorney James Blatt said Knight was called to Tam’s Burgers in Compton for a meeting and was attacked by four people, including Sloan, as he slowed his truck. The men beat him through his window and threatened to kill him.Advertisement

Corina said evidence thus far disputed Blatt’s account, saying only one man exchanged blows with Knight through the window before he got run over.
The incident comes less than six months after Knight was shot six times at a West Hollywood nightclub in August — the second shooting he’s survived. No arrests have been made.
Knight punched the gas and fled in fear, Blatt said. He had no idea he hit two men. Corina said that claim is hard to believe.
Knight surrendered early Friday and was booked on suspicion of murder. He was being held on $2 million bail.
At 6-foot-4 and weighing 325 pounds, Knight’s reputation as an imposing figure is credited, in part, with helping create Death Row Records when he strong-armed another label to release Dr. Dre from his contract, said Chuck Creekmur, CEO of allhiphop.com.
“You can’t separate Suge from the music that came out of Death Row Records,” Creekmur said. “He’s linked forever to a really, really great musical period of time. And that would be linked to a really horrific period when we lost several of our brightest stars.”
Knight was at the center of one of the most notorious rap conflicts of the 1990s, pitting rappers Tupac Shakur against Biggie Smalls in an East Coast versus West Coast rivalry.
Knight was sent to prison for nearly five years for badly beating a rival with Shakur at a Las Vegas hotel, just hours before Shakur was fatally shot while riding in Knight’s car just east of the Strip.
Smalls, whose real name was Chris Wallace, was shot to death in a similar attack six months later.
Many of the records Knight released helped immortalize Compton, the city south of LA where Thursday’s incident occurred, in hip-hop folklore as a gritty and violent urban environment, although crime there has dipped significantly there since its 1990s peak.
Knight and Dre later had a falling out and Dre left. The record company eventually declared bankruptcy and was auctioned off.
Dr. Dre and Ice Cube, another former N.W.A. member, were at the film location Thursday, but they didn’t see Knight, according to the person who spoke on condition of anonymity. Filming was shut down for the day and not resumed Friday.
The history of Knight’s run-ins with the law goes back more than 20 years.
In November, Knight pleaded not guilty to a robbery charge filed over an incident in which a celebrity photographer accused him of stealing her camera in Beverly Hills. Because of prior convictions, he could face up to 30 years in prison.
He has felony convictions for armed robbery and assault with a gun and served time for probation violations. He pleaded no contest in 1995 to assaulting two rap entertainers at a Hollywood recording studio and was sentenced to five years of probation.