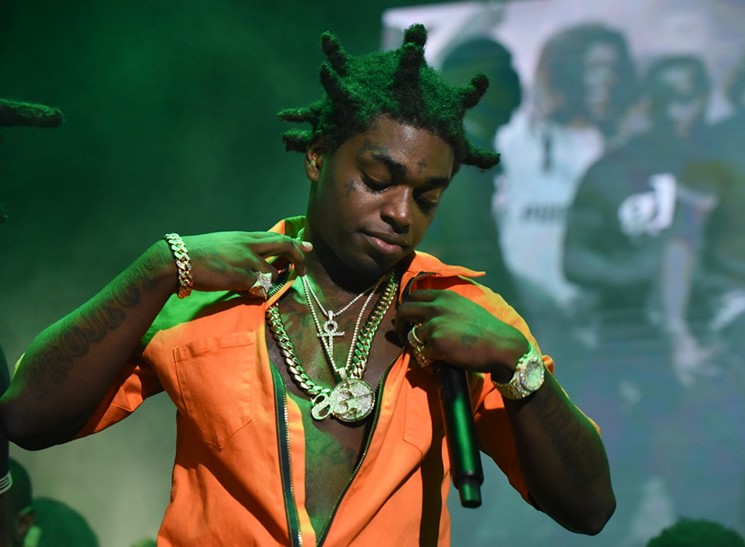 Rapper Kodak Black was arrested at the U.S. border on drugs and weapons charges when he entered from Canada, it has been claimed.

The 21-year-old’s whereabouts had been shrouded in mystery after he abruptly canceled a concert in Boston last night.

But it now appears he was forced to pull the show in Boston after he was apparently taken into custody by customs agents.

According to a report by TMZ he was stopped and arrested for carrying at least two guns and a supply of marijuana when he tried to enter the country.

The Wake Up in the Sky rapper was set to appear at the House of Blues near Fenway Park in Boston on Wednesday night.

Fans of the singer reportedly waited outside the venue for hours, before Black’s team finally called off the show.

Kodak kicked off his Dying to Live Tour on March 14, with a show in New Orleans, Louisiana.

Since then, he has played across the United States and Canada, last appearing in Detroit on April 13.

The rapper was next slated to play Foxwoods Resort Casino in Mashantucket, Connecticut on Thursday.

The musician, born Dieuson Octave, caused a storm earlier this month when he said he planned to ‘pursue’ Nipsey Hussle’s partner Lauren London.

‘I’ll be the best man I can be for her. I’ll give her a whole year. She might need a whole year crying and sh*t,’ he said.

His bizarre comments less than a week after Hussle was shot dead outside his clothing store in Los Angeles.

Black later apologised, saying: ‘If I disrespected you Lauren London, in any shape or form, I’m sorry.’