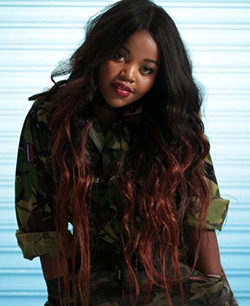 TKAY Maidza wanted to go back to her musical roots and just be cool to make her first album, she says in this revealing q and a.
SINCE releasing your debut single Brontosaurus three years ago when you were 17, you have put out so much music or featured on plenty of tracks leading up to your first record, Tkay.
There’s always this feeling that maybe I am going to be behind so I want to keep making stuff to stay ahead. I want to be with whatever is currently going on.
You learnt to rap mimicking artists you loved but sound unique as both a rapper and singer.
Even when I try to make something that fits somewhere it does end up sounding like me. I don’t think I tried to be Australian. But I do think it sounds different because I don’t want to sound American.
Were you worried about copping an Iggy Azalea kind of backlash in the US?
Not really. When I was writing the album, my biggest problem was that I was singing a lot. When we hit halfway and the deadline was coming, I said we needed more rap songs because everything we had was pop. That’s not really what I want to perform so I brought it back closer to what I had done in the beginning. It wasn’t really the thought ‘I can’t do this because that’s what Iggy did and she got hate for that’. I write the song and if people like it, they like it.
You have described the Tkay album as the story of the life of a high school girl.
It’s been four years since I was at school but I feel like no matter where you are, you’re still in that kind of situation. When you first get to high school, you figure out who are the cool kids, the uncool kids and then there’s you and maybe you fit in everywhere or you alienate everyone. The same old story everywhere. Even now I feel like I’m in school. When you’re at a festival, you see people and you want to be as cool as them. I feel like when you’re 16 to 22, that’s the high school of music.
A lot of the album deals with you following your dreams despite the doubters.
I’ve had lots of friends abandon me when they were almost intimidated by what you want to do. Jealous could be the word … when you really want to do something and you tell them you are going to and they’re like ‘fine, go do that’. I’ve had lots of psychic readings and they always tell me that I have a lot of those kind of females around me. They don’t realise they are doing it. I have also had a lot of old friends come back and say ‘I didn’t realise I was being so mean to you just because you wanted to do music. And now I understand it’. And now they’re happy for me. It’s nice they realise that. I think they wish they had the courage to do what they want to do.Advertisement

And you could have done other things. You were studying architecture after leaving school at 16 and you could have been a professional tennis player before that.
I could have been but I think I got to the point where I knew I wasn’t going to be. So I stopped. When you’re about 15 you have to make that decision you are going to do tennis and nothing else or you go to school. I chose school because I didn’t like the fact someone could cheat or sabotage what you were doing, that other people could control your fate. How can someone say a ball is out when it wasn’t?
And you can control what you do with music.
I write everything or if I am working with another writer I will call it when I don’t think I can sing that. I will say what I want on a track. But I don’t have 100 per cent choice of songs to make the record because they think something will do better. They’re paying my bills and everyone has to be happy. I do have control about what I am going to perform live.
You are also in demand from such a cross section of the Australian music community. You were the only female artist to share the stage with the Hilltop Hoods for their all-star Cosby Sweater performance at the Triple J 40th anniversary and you also feature on your friend Troye Sivan’s record.
That’s probably because of how versatile I am. And everyone is lovely. I think nice people attract each other and even if they don’t like my music, they’ll be ‘Oh, she’s so sweet’.
Killer Mike from Run the Jewels made you global when he sang your praises after seeing you at the Falls Festival and now he features on the single Carry On.
Yeah, that felt really cool. He’s so lovely. I thought Run the Jewels were amazing when I saw them and the fact he was on a lot of OutKast’s albums before that made me love what he does. I watched them play every show at Falls and apparently he watched me. I was too scared to annoy them, they might have thought I was a little girl groupie. I wanted to be able to talk to them when they knew who I was. So when he told everyone he thought I was amazing, I sent him a thank you and he said if I wanted anything to just let him know.
How fast can you rap? You can get a lot of words out quickly.
I have no idea. How do you guess that? I’ve never tried to work it out. I think I have slowed down a bit … but I can go pretty quick. When I first started it was how many words can I fit in a sentence to make it interesting. It’s challenging to find different rhythms in the music. It’s like drums and I don’t realise when I’m writing that I’m mimicking a rhythm in the song.
What do you have planned for the album tour?
We’ve got a drummer now, it’s Tim (Commandeur) from Operator Please. He gave me a card thanking me for bringing on the tour and I wanted to cry it was so sweet. He’s grown up now but still looks like he’s 15. I loved their music so much.

This article is taken from The Advertiser