LONDON: It wasn’t so long ago that Marcus Rashford was widely and fondly viewed as English soccer’s national treasure.

This week, though, is set to underscore his declining status for both club and country.

For Manchester United, it’s the team’s biggest game of the season so far — an elimination match against Atletico Madrid in the last 16 of the Champions League on Tuesday.

Two days later, England names its squad for the friendly matches against Ivory Coast and Switzerland, the third-to-last selection by coach Gareth Southgate before he picks the players he wants to represent the country at the World Cup in Qatar.

There’s a chance Rashford isn’t involved in either. 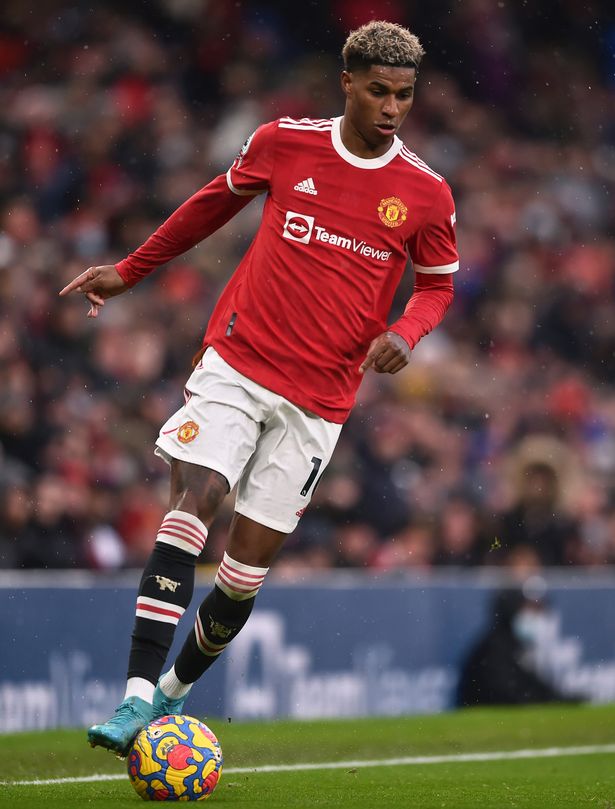 The 24-year-old forward hasn’t played a single minute for his country since missing a penalty in the shootout loss to Italy in the European Championship final in July.

And in the intervening eight months, Rashford has gradually slipped down the pecking order of attackers at United. To such an extent that, a week ago, he couldn’t make the starting lineup in a derby match against Manchester City despite the club having four forwards — Cristiano Ronaldo, Edinson Cavani, Mason Greenwood and Anthony Martial — unavailable for various reasons.

It has even got to the point where Rashford, a local lad from Manchester, could yet even leave his boyhood team. That possibility was raised by United manager Ralf Rangnick last week.

“Even suppose he and his agents or his family at one stage of the summer think about maybe going to another club, well then he can do that,” Rangnick said, “but in the summer.”

Such a scenario seemed unthinkable last season. One of the regulars in United’s team under then-coach Ole Gunnar Solskjaer, he was also the talk of Britain off the field, having forced the government twice to perform U-turns on its social policy during the pandemic because of his campaigning on behalf of vulnerable children.

It was only in November that he received his MBE, or Member of the Order of the British Empire, for his activism.

“He is not only a top footballer but also a fantastic human being,” Solskjaer said of Rashford. “Future captain, maybe of England and Manchester United.”

The slide in his career, then, has been stark.

After being one of three players to miss a penalty — and later be subjected to racist abuse online — on that fateful night against Italy at Wembley Stadium on July 11, Rashford had four months out following shoulder surgery. He had been playing through pain last season, when he made 64 appearances for club and country, raising the potential of suffering burnout.

Since returning, he has scored five goals in all competitions, and only two since Oct. 30. Confidence is clearly an issue — the swagger of recent years has gone, as it seems has the joyfulness in his game — while more and more threats to his place in United’s forward line have emerged.

Now regarded as a wide forward, Rashford was overtaken by Greenwood in the early stages of the season. Greenwood is unavailable now after being arrested on suspicion of the rape and assault of a woman.

In recent months, Jadon Sancho has finally settled at United following his $100 million offseason move from Borussia Dortmund and is one of the few players to have really prospered under Rangnick’s change of style and approach. Then there’s Anthony Elanga, another young winger who has been the club’s breakthrough star this season.

Rashford has started just three of United’s last 12 Premier League games, the most recent being on Saturday in the 3-2 win over Tottenham, when he came off after 67 minutes to be replaced by Elanga.

The 19-year-old Swede also came on for Rashford in the first leg against Atletico, making a quick impact by scoring the equalizer in the 1-1 draw.

Sancho and Elanga are showing more dynamism and energy than Rashford, while their work rate seems more suited to Rangnick’s pressing game. It’s highly likely they will start the second leg at Old Trafford.

Rangnick clearly sees something in Rashford — “he’s got an abundance of talent,” the German coach said, “he’s got almost everything you need for a modern striker” — but says it’s now about “transforming the performance of the training sessions into the regular games.”

At least for the moment, the spark has gone from a player who, in October, was urged by Solskjaer to “prioritize his football” to cope with the challenges of playing for United and England, in the wake of all the remarkable things he has done off the field.

Time will tell if this is simply a minor blip in a career that promised so much. Either way, this week could be a sobering one for Rashford.