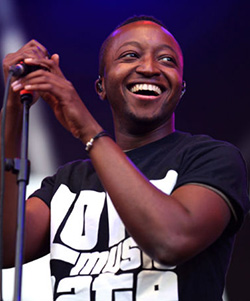 WITH fans including Elton John and Pharrell, Rationale is releasing his debut album. He talks to Jessica Barrett about growing up in Zimbabwe, his ‘Marmite voice’ and broaching his relationship with his absent father I’m not sure if it’s a coincidence that in the week I’m due to meet Rationale, I hear the singer’s name daily. On Radio 1, where DJ Clara Amfo is a big fan and Breakfast Show host Nick Grimshaw plays “Loving Life” to his listeners; on Instagram, where a friend is raving about the new album artwork; and in the industry magazine Music Week, which reports that Rationale, real name Tinashé Fazakerley, has signed a worldwide deal with Warner/Chappell Music.
Rationale’s eponymous album is his debut under this moniker (he previously released music under his own name after signing with Island Records) but the singles have been drip-fed via Spotify and Soundcloud over the past couple of years.
In the process, Fazakerley has caught the ears of some impressive figures. High-profile fans include Elton John, Justin Timberlake, Sam Smith, Ellie Goulding and Pharrell Williams, who raved about him, saying: “This person has discovered beauty in their voice.”
He spent five days writing with Katy Perry earlier this year for her most recent album Witness, coming up with “Act My Age”, and he wrote tracks for Rag’n’Bone Man’s latest album. Being recognised by, and asked to work with, established musicians is important for Fazakerley, who still considers himself primarily a songwriter.

“That’s what I live for – what any musician lives for,” he says. “If you ask any musician, it gets too much trying to be the performing monkey on stage all the time. The core of what any of us do is to create. I’ll always be writing songs, whether they’re for me or anybody else. It’s a calling card for people to want to work with me.”
If you’ve ever heard him sing, though, you will know that his real calling card is his voice, with its distinctive depth and power. It was unique enough to thrill Pharrell, but Fazakerley still thinks of it as a “Marmite voice”.
“My voice is quite weird, I suppose,” he says. “You either love the power of it or you don’t but you should be able to recognise that it’s me.”Advertisement

He credits his 1980s-sounding tone to a lifelong obsession with Morrissey and Donny Hathaway, adding: “I’ll always be a soul singer.”
Born in Harare
Born in Harare, Zimbabwe, in 1984, Fazakerley was raised by his mother, his father having never been a figure in his life. Growing up, music represented “therapy and relaxation” in his neighbourhood.
He loved the feeling of family and community there, and the tropical heat, but his mother decided to move the family to London when he was “seven or eight years old. She saw how hard things were going to be for us back home and she always wanted us to do better. She arrived in the UK with absolutely nothing and worked her way up: I’m talking cleaning jobs, doing two three jobs at the same time, just so we could be normal kids who go to school.”

The family settled in Stoke Newington (pre-gentrification), north London, and as the years went on, Fazakerley overcame chronic shyness and discovered music at school in Hackney. Aged 15, he announced that it was what he wanted to do with his life, which didn’t go down well with his mother, who had spent the years since they had moved putting herself through university to become a psychiatrist.
“She kicked me out of the house for a little bit; I moved across the road to a friend’s house for a month. Then she let me back and said: ‘If you want to ruin your life, then ruin it’. And the other day, I think it might have been when Pharrell mentioned me, she rang me and said: ‘Oh maybe this is a job then, you’re doing all right’,” he says, laughing. “I’m 33 now and she’s finally taking me seriously.”
They’ve never had a sentimental relationship, though one song on the album sparked a conversation which had never naturally arisen: he wrote “Prodigal Son” about his absent father. When his mother heard the lyrics, “I don’t wanna go lonely/ I don’t wanna reach out in the dead of night/ And find no one to hold me”, she asked him in a matter-of-fact way if there was “anything he wanted to talk about”.
Fazakerley doesn’t speak to his father; he says he knows he is still alive, and that’s it.
“I remember having a conversation with a friend of mine, saying: ‘Why is it that people like you and me, young black guys, just don’t seem to have fathers around from a very young age?’ That’s not a generalisation, but in my friendship circle, there was a strong accent of that. I went to write about it in a tasteful way. A lot of my friends saw the truth in the fact they didn’t have that father figure and probably had both mum and dad in mum. And they had to be better and prove that they weren’t their father’s son.”
Brexit and the anti-immigrant feeling it has stirred up is “dangerous territory” when it comes to talking to certain friends and relatives, says Fazakerley.
“I fight tooth and nail for this country and what it’s given me, because of the hard work of many before me. I can understand the frustration of some, that they don’t want there to be a massive open door. But I think there’s a very basic misunderstanding of the concept of humanity and being kind to others. It’s the basic lack of appreciation of other people that gets to me. Assimilate the information and then call on that instead of pushing information that’s from generations’ worth of hate. I can’t abide it.”

Having bowed out of his short-lived career as Tinashé in 2010, Fazakerley is happier this time around. He made his latest album himself over two years before being signed to Warner, and he feels as though he has carved his own path.
“I write the songs, I play all my own instruments and record all the vocals, but I’m still a budding producer, so I’m honing my craft.”
One thing Fazakerley has never been able to do is return to his native Zimbabwe to perform his music. Any attempts to perform there, or to record a music video as planned, have been denied by immigration officers.
“It’s ironic, I suppose,” he says. “I’ve played around home – Malawi, South Africa – but never home. It’s a big shame.”
While in London, he likes to play badminton (“My friends think I look ridiculous”) and read – currently, a book about the human brain. He’s been here for more than 25 years, but London is still a great love. The thrill of getting the Tube for the first time after arriving from Zimbabwe has stayed with him.
The Grenfell Tower fire was a deep blow, having lived in low-cost housing himself as a child.
“As a Londoner, I feel as though the poor will continually be ignored,” he says. “Unless things that are awful happen to people in more prosperous situations, the poor will keep being sidelined. [Grenfell] could have been avoided had people been cared for more.
“I thought maybe there would be change after that. Things that have been done seem to have been done to save face, and that frustrates me. But the community stood up and had a voice and displayed their anger. Their voices were heard.”