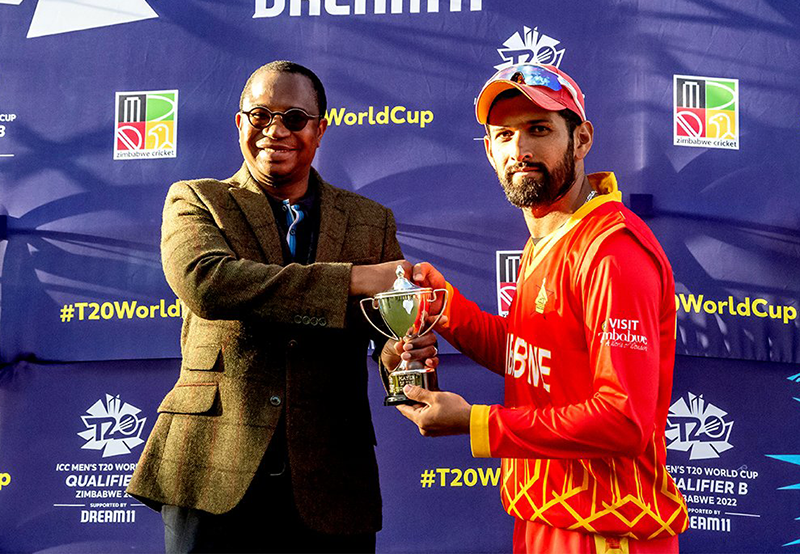 CHEVRONS star Sikandar Raza produced a magical spell of spin bowling as Zimbabwe were crowned the winners of the ICC T20 World Cup Qualifier B trophy in style with a 37-run win over Netherlands at Queens Sports Club on Sunday.

Despite having already qualified for the T20 World Cup in Australia after convincingly winning the first four matches, Zimbabwe were desperate to finish the campaign on a high by beating Netherlands.

But an anti-climax appeared on the cards.

Zimbabwe captain Craig Ervine won the toss and elected to bat first, but the decision backfired after his side was bowled out for a low score of 132 runs in 19.3 overs, their worst batting performance in the tournament.

Logan van Beek was the most impressive of the Netherlands’ bowlers after claiming three wickets for 18 runs in four overs and was well supported by Bas de Leede who claimed two wickets for 19 runs.

In an all-round bowling performance by the Dutch side, all the six bowlers used by their skipper Scott Edwards claimed at least a wicket each.

Zimbabwe struggled to form partnerships as they lost wickets at regular intervals. Sean Williams top scored with 28 runs from 25 balls while Regis Chakabva chipped in with 27 runs from just 16 balls at the top of the batting order.

After struggling with the bat Zimbabwe, who were cheered on by a big crowd needed turn up with the ball to entertain any hopes of salvaging the match.

Off-spinner Wesley Madhevere provided then with the perfect start when he claimed two crucial wickets in the third over by trapping Max O’Dowd LBW for 12 before doing the same to Bas de Leede for just one run.

Thereafter it was Raza’s turn to come to the party as he trapped the dangerous Stephan Myburgh in front of the stumps for 22. Scott Edwards (7) and Logan van Beek (0) too couldn’t last long, as Netherlands were now reeling at 56/6. Turn up with

aza would then get his fourth with the scalp of Klaassen, to end up with figures of four wickets for eight runs in his four overs, in what was a match-winning spell.

Luke Jongwe would finish off the proceedings by cleaning up the tail, to lead Zimbabwe to an incredible 37-run victory.