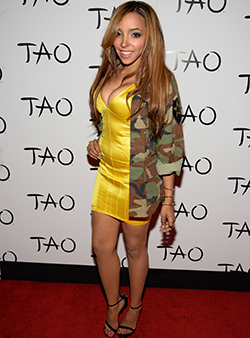 TINASHE Jørgensen Kachingwe is talking – not about music, but about taekwondo.
Before she began to sing, write and produce music – and before she spent much of her teenage years as an actor – Kachingwe was an expert in the Korean martial art.
“I think I was 11 or 12 or 13 years old,” she says. “That’s true; I was a black belt. When I start something, I always finish it. Always.”
This is what you learn when talking to Tinashé Kachingwe – or simply Tinashe, as her fans know her – she finishes what she started.
A year ago you likely hadn’t heard of Kachingwe. The Los Angeles-based singer-songwriter was just one in a new wave of female R&B performers beginning to surface in the United States. But then 2 On happened.
A slick love letter to intemperance that would become one of the songs of the North American summer, it was easy to be cynical about 2 On. There was the spare, addictive beat by in-demand producer, DJ Mustard, and an obvious shift away from the temporal, low-key songs that until that point had defined Kachingwe’s output.
But the then 20-year-old sold it with some assured writing and the addition of a razor-sharp guest verse from Los Angeles rapper, Schoolboy Q. 2 On would eventually spend four weeks at the top of the Billboard Rhythmic charts.
“It’s been insane,” Kachingwe says. “I’ve travelled the world … Often when I go out now, people recognise me.”
Tinashe – 2 On ft. SchoolBoy Q

Indeed, at some point over the last 12 months Kachingwe moved into that odd zone of celebrity where the internet apparently knows more about her personal life than she does. Search online and you can find her height and weight, bra size and dress size.
You can even find stories about a nose job she never had. It makes her chuckle, but the discomfort in her voice is obvious.
“It’s crazy that someone can literally make something up out of nowhere and it can be considered true,” she says. “Perhaps I need to get used to it … because it’s going to happen no matter what.”
It’s the reasoned response of a veteran entertainer. And in a sense, that’s what Kachingwe is. Her father, Michael, a theatre actor originally from Zimbabwe, took Tinashé along to his agency when she was just four years old. Twelve months later she’d already appeared in her first film.Advertisement

Over the next 10 years there were bit parts in The Polar Express and Avatar: The Last Airbender, before she landed a recurring role on Two and a Half Men. Search online and you can find an acting reel for Kachingwe from the much-maligned (if immensely popular) sitcom. She’s hardly embarrassed.
“It’s all a part of how I got to this point,” Kachingwe says. “It’s all part of the story.” (And, she says, Charlie Sheen was fine: “My experience was that he was always super professional. He was great.”)
But Kachingwe’s career was beginning to change tack. In 2007 she joined the Stunners, an all-girl pop group masterminded by music industry veteran, Vitamin C. A deal with Columbia Records, a clutch of well-received singles and a tour with Justin Bieber would follow, before the Stunners disbanded in 2011.
It didn’t make any difference to Kachingwe; a new course had been set. She populated her bedroom with recording equipment and, without any qualifications, taught herself how to produce music, eventually self-releasing a series of impressive mixtapes.
The independence had been forced upon Kachingwe but it would become a habit, a fresh major label deal with RCA Records in 2012 doing little to temper her artistic vision.
Regular collaborator, Dev Hynes, better known as Blood Orange, told Dazed & Confused in 2013 that, “Tinashe knows what she wants … She’ll tell me upfront if what I’m doing works or not.”
“I think I’m like that with everyone,” Kachingwe says, when asked about Hynes’ comments. “It’s important not to be intimidated. To have a firm opinion on your own work.”
The ultimate result was the October release of debut album, Aquarius. It illustrated 2 On was a red herring, the LP grounded in the slow-burn, silken productions of her mixtapes, calling to mind the darker moments of Janet Jackson and Aaliyah.
It sets up an interesting dichotomy when thinking about a Tinashe live show. Is it more about the mood or the physicality?
“Absolutely, it’s something to dance to,” she says. “I have a lot of dancers and a lot of energy onstage. I want people to be inspired.”
And then there’s the future. Success opens doors in the music business, but also tends to bring more pressure.
“I think it will be fine,” Kachingwe says. “There’s still an understanding [with RCA] of what I’m like and who I am. And that I’ve begun something that I want to follow through on.”
In other words, Tinashé Kachingwe is going to finish what she started. “Exactly,” she says.