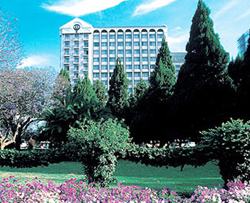 MEIKLES Limited is holding off implementing an empowerment plan it agreed with the government in terms of the country’s ownership law, until the central bank has repaid a multi-million dollar debt owed to the diversified group, Parliament heard on Thursday.
Last year, Meikles Limited shareholders approved the allocation of 10 percent of the company’s shares to employees in a bid to comply with the country’s empowerment law, which requires foreign-owned firms to sell 51 percent stakes to local blacks.
Early this month, Meikles chairman John Moxon said the group expects to recover $89 million, owed by the Reserve Bank of Zimbabwe since 1998, at the end of July, after taking the bank to court to recover the funds.
Part of the money would be used to finance the indigenisation and empowerment deal, Moxon said.
The debt was accrued from transactions related to the group’s dual listing on the Zimbabwe Stock Exchange and the London Stock Exchange.
Presenting oral evidence before a parliamentary committee on indigenisation and empowerment on the Employee Share Ownership Scheme, workers’ representatives said to date only a third of the 24 million shares had been paid for through a $1,4 million loan taken by the company from the pension fund without their permission.
The workers have to repay the loan, which had now risen to $1,69 million because of interest while the shares they now hold were not earning them any dividends.
Workers accused management of failing to involve them when the scheme was set up five years ago or apprise them on new developments.
“The biggest challenge we have is how to pay for the outstanding shares. We have not yet accessed the shares and we are just given promises,” said workers’ chairperson for Meikles Hotel, Rodney Mutinhiri.
Workers, he said, had initially proposed to each pay $5 per month, but management said it was too little.
“We were left out when the programme was started and now we are banking on good faith that they will meet their obligations as promised but we have nothing written on the amount of shares we are supposed to get,” Mutinhiri said.
Meikles’ full year financial results to March showed a dismal performance across its business units, with only the hotel unit, which had a revenue increase of five percent to $15.6 million.Advertisement

The group reported a profit of $37.2 million, boosted by the inclusion in the profit and loss statement of ‘net investment revenue’ of $42 million, which relates to the RBZ debt.
“Had the funds not been included in the income statement, Meikles would have been in a loss position,” noted investment bank, Tetrad.
“In as much as the inclusion of the funds improves the company’s results, a perception may be created that the company has engaged in imprudent accounting to reflect a better financial position than the one it is in,” it said.
However, the results are unaudited and were released with approval from the Zimbabwe Stock Exchange pending finalisation of the issue.
“One hopes Meikles will finally be able to get access to its funds as this would greatly improve the financial standing of the company. Until then it would perhaps be best to not book the money onto the books and potentially misleading investors,” said Tetrad.
“The way the deed was crafted is not for us to benefit but for the company to show that it has complied with indigenisation but in terms of workers benefits there is nothing practical, maybe our children will benefit,” said Mutinhiri.
Chairman of Tanganda workers in Mutare, Blame Donza said: “Our employers didn’t want this programme (indigenisation), there is dilly-dallying and prohibitive systems put in place so that it takes long so that people fail to get benefits.”
He appealed to government to put up mechanisms to follow up on indigenisation compliance.