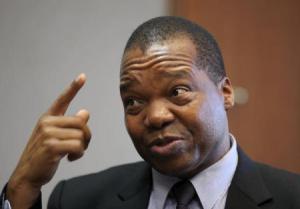 RESERVE BANK governor, John Mangudya, said Thursday that over 1.8 billion dollars was externalized from the country in 2015, worsening the liquidity challenges in a struggling economy.
Mangudya, presenting his annual monetary policy statement, said according to records, 684 million dollars was externalized by individuals while firms externalized 1.2 billion dollars.
“Such funds leave Zimbabwe without circulating in the economy, resulting in low multiplier effect and low aggregate demand,” the governor said.
He said individuals externalized funds for such purposes as donations, investments, account transfers while firms externalized in the form of export sales proceeds and highly inflated management, technical and professional fees.
He said illicit financial flows had been worsened by the “regional disruptive arbitrage activities as regional businesses search the green back in Zimbabwe where it is readily and easily available.”
The governor said the country needed to plug the leakages of foreign exchange for the economy to undergo durable and robust transformation.
“We are exporting liquidity. We need as a nation to put a stop to this behaviour,” he said. To mitigate externalization of the funds, the governor introduced with immediate effect a raft of measures to close loopholes in the financial system including dispending with the concept of free funds which he said had become a fertile breeding ground for illicit financial flows.
“The term free funds under a dollarized economy is a misnomer which brings distortion and lack of transparency in the use of foreign exchange resources. Free funds terminology was relevant under the Zimdollar era,” he said.
Individuals are now also required to give prior notice of not less than a day to a financial institution for cash withdrawals of above 10,000 dollars to curb externalization and money laundering, the governor said.
Offshore investments would now require prior bank approval while individuals should report through normal bank channels to the central bank if aggregate value of foreign accounts or investments exceeds 10,000 dollars at any point.
Zimbabwe is facing an acute liquidity crisis that has seen the government struggling to pay its workers on time. The government will only start paying its workers their 2015 annual bonuses this month after a three month delay due to cash shortages.Advertisement

Meanwhile, the governor announced various measures to improve liquidity in the economy that include reviewing upwards the Nostro limits from 5 percent to 10 percent of the bank’s total deposits, aligning the pricing structure for external loans with domestic interest rates ranging from 6 percent – 10 percent per annum and increasing single investor limit on the Zimbabwe Stock Exchange (ZSE) from 10 percent to 15 percent.
Foreign investors are also now allowed to acquire listed shares on the ZSE of up to 49 percent per counter from 40 percent. This is also to align the exchange control threshold to the indigenization law, he said.