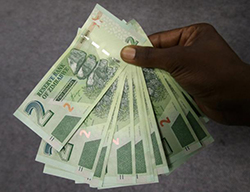 THE Reserve Bank of Zimbabwe (RBZ) has, with immediate effect, increased daily bond note withdrawal limits to $100 per day and $300 per week.
In a statement released Tuesday, the RBZ attributed this development to the need to ensure that the banking public is not continuously constrained by the lower withdrawal limits.
The bank disbursed more bond notes valued at $12 million late last week but long queues were seen Tuesday afternoon at most banks in Harare as people prepare to go for the holidays.
The said the cash queues would not be cleared overnight.
“In line with the gradual and measured approach to disburse bond notes into the market on a drip-feed basis, the Reserve Bank of Zimbabwe is pleased to advise the public that bond notes valued at $12 million were disbursed during the week ending 16th December 2016,” the bank said.
“This brings the total amount of bond notes disbursed from commencement on the 28 November to 16 December 2016 to $29 million,” reads the statement from the apex bank.
RBZ boss John Mangudya commended the manner in which the banking public continues to embrace the use of plastic money.
He urged financial institutions and other service providers to ensure that point-of-sale and other electronic payment facilities are spread throughout the country.
“The Bank is encouraged by the smooth circulation within the domestic economy of bond notes which were primarily introduced to finance the export incentive scheme of up to 5% payable to exporters of goods and services and diaspora remittances.
“A cumulative total of $6.2 million bond notes have been deposited by the banking public at banks as at the 16th of December 2016.”
The RBZ also announced that tobacco growers who sold their crop this year have now benefited from its 5% export incentive scheme.Advertisement