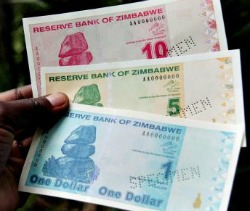 THE Reserve Bank of Zimbabwe has introduced a 5-dollar bond note into circulation in a move to ease the persisting cash challenges, according to a statement on the central bank’s website.
The new purple notes amounting to 15 million started circulating Thursday to bring the total amount of bond notes in circulation to 88 million dollars.
The central bank first introduced a 2-dollar bond note and a 1-dollar coin in November last year as a measure to alleviate the cash shortages.
The notes are backed by a 200-million-dollar Africa-Export Import Bank (Afeximbank) facility, and are currently trading at par with the U.S. dollar.
The cash crunch has resulted in people spending hours in bank queues while some importers of critical goods and services have been seriously affected by the shortage of foreign currency.
Reports say some businesses are now offering discounts on cash purchases in U.S. dollars while charging more for mobile and plastic money.
Zimbabwe adopted the use of multi currencies in 2009 after its currency had been rendered worthless by hyperinflation.
However, since last year, the country has faced acute bank note shortages, particularly of the widely used U.S. dollar, due to a number of factors including money laundering, a widening trade deficit and suppressed foreign investment inflows.
Advertisement