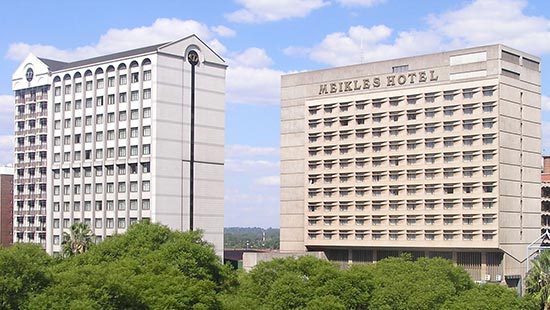 HOTEL group, Meikles Limited, was owed $47 million by the central bank as at the end of December 2013, latest data from Parliament shows.
The company was on Tuesday temporarily suspended from trading on the Zimbabwe Stock Exchange on allegations of trying to manipulate its stock price through over-stating its debt owed by the Reserve Bank
According to amendments contained in the Reserve Bank Debt Assumption Bill, which has been tabled for debate in Parliament, Meikles is among 60 other firms and 466 individuals that are owed a total of $1, 424 billion by the central bank as at the end December 2013.
Government has proposed to take over the central bank’s debt under the Reserve Bank Debt Assumption Bill.
Meikles, which posted a $2,8 million loss for the half-year ending September 30, claims it is owed $90 million by the central bank, a figure that is now being disputed and investigated by the local bourse.
Information in the RBZ Bill shows that the central bank’s principal debt to Meikles was $25, 882,099.77 in 1998 but shot up to $47,044,440.70 at the end of 2013 after inclusion of interest, charged at a rate of eight percent per annum.
According to the data, the money was specifically used to purchase grain, fuel, electricity, water treatment chemicals and drugs.
Meikles has said it was banking on the release of the money to fund its expansion programmes as well as compliance with indigenisation and empowerment laws.
The listed firm’s debt issue came under the spotlight early this month when Bikita West legislator, Munyaradzi Kereke, a former advisor to the then central bank governor, Gideon Gono, accused the hotel group of inflating the figure to manipulate its stock price.
The ZSE on Tuesday announced the temporary suspension of Meikles from trading on the bourse after it acquired new information regarding the debt situation.
“The temporary suspension was necessitated by the carrying amount of the asset placed with the Reserve Bank of Zimbabwe (“RBZ”) as disclosed in the company’s audited financial statements for the year ended 31 March, 2014,” ZSE chief executive, Alban Chirume said in a statement.
“On 13 February 2015, the Securities and Exchange Commission of Zimbabwe received a written submission from the RBZ on the asset’s carrying amount, information which was availed to the ZSE. The ZSE believes that the information received is material and price-sensitive.Advertisement

“On this basis, the ZSE deems it important to temporarily suspend trading whilst clarity is being sought in the interest of maintaining market integrity through promotion of equal dissemination of information.
“The ZSE has therefore, pursuant to Paragraph 1.4 in Section 1 of the ZSE Listings Requirements, temporarily suspended trading in Meikles Limited’s shares.”
Meikles was reported to have challenged the suspension at the High Court.