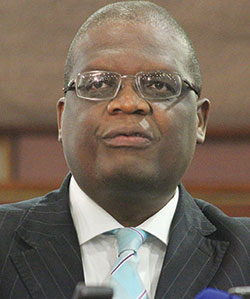 THE Reserve Bank of Zimbabwe (RBZ) is close to making key appointments to run a unit that will buy non-performing loans (NPL) running as high as 90 percent at some lenders in the country.
“We have seconded a few people from the central bank to work on it and have secured offices for them,” RBZ Deputy Governor Kupikile Mlambo said in an interview last week.
“We need to set up the board and then we will appoint the CEO. It’s already operating. We want to remove the NPLs from the books of the banks.”
Zimbabwe Asset Management Corp. was established in August to deal with about $700 million of bad debts.
The highest NPL levels are at local institutions, with four “facing liquidity and solvency challenges due to macro-economic and institution-specific sectors,” the central bank said in an August 25 policy statement.
Non-performing loans at local banks average about 18.5 percent, Mlambo said. While at some institutions the level of NPLs is as low as 2 percent, at others “you have 80-90 percent of NPLs. For the big banks, and foreign banks, non-performing loans are quite low.”
Foreign banks that operate units in the country include London-based Barclays Plc (BARC), Standard Chartered PLC, Togo-based Ecobank Transnational Inc. as well as Johannesburg-based Standard Bank Group Ltd. (SBK), and Nedbank Group Ltd.
Credit Stalled
Credit growth has stalled in Zimbabwe, which is a concern for the central bank because it wants to see banks lending money, Mlambo said.
Tight liquidity was among factors cited by the Confederation of Zimbabwe Industries last week as it warned in an annual survey that the decline in manufacturing had reached “catastrophic levels,” with dire consequences for the economy.
Unemployment is as high as 80 percent, economists have estimated. The government’s forecast of economic growth for 2014 was cut to 3.1 percent from an initial 6.4 percent, Finance Minister Patrick Chinamasa said Sept. 11.
IH Securities, based in Harare, in May estimated that non-performing loans climbed to 15.9 percent at the end of 2013.
The country abandoned its local currency in 2009 in favour of multiple foreign currencies, including the dollar and South African rand, to help contain hyper-inflation.
“When we dollarized and when there was an expectation that the economy was on the rebound, many companies and individuals came to borrow and banks were giving money,” Mlambo said.Advertisement

Companies and individuals have failed to achieve the kind of returns they were expecting and some have failed to service their loans, he said.
Default Charges
As that happened, banks imposed default charges. “That’s what actually increased non-performing loans — the original loans are not that big, but the default charges are high and that is our problem now.”
The central bank is establishing a national Credit Reference Bureau, which should be operating within a few months, Mlambo said. The bureau is meant to have a record of all Zimbabweans who have debt.
“We want everybody who is owing to be in the system, including the governor and the deputy governor,” he said. “If everybody is not captured, then the system has no credibility.”
The country’s banking industry is vulnerable because of bad-loan induced losses, said Prosper Chatambira, an economist with the Labour and Economic Development Institute of Zimbabwe.
“This is mainly because of poor corporate governance and high interest rates,” Chatambira said in an Oct. 10 phone interview. “It is affecting mostly mainly indigenous banks.”
Christopher Mugaga, an economist with Harare-based Econometer Global Capital, said three banks risked losing their licenses in last quarter of this year.
“They are sitting on a time bomb of toxic assets which are definitely irrecoverable,” Mugaga said. “This naturally threatens their capital positions.”