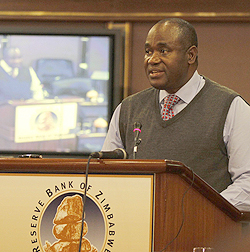 THE Reserve Bank of Zimbabwe plans to raise minimum capital requirements for microfinance institutions from the present US$25 000 to US$5 million as part of a cocktail of measures the central bank said are aimed at protecting the public.
Central Bank Governor, Dr Gideon Gono said the new requirements would be brought into effect once the Micro-Finance Bill, now before Parliament comes into effect.
Dr Gono said this yesterday while giving oral evidence before a Parliamentary portfolio on Budget, Finance and Investment Promotion on the central bank’s views on the proposed legislation.
Bulawayo South MP, Eddie Cross (MDC-T) chaired the committee on behalf of Goromonzi South MP, Paddy Zhanda (Zanu PF), who was said to be away on business.
“The deposit taking function of micro-finance banks requires that they be subjected to more stringent regulation and supervision, including a minimum capital requirement of US$5 million as opposed to US$25,000 currently applicable for credit only micro-finance as that is designed to protect depositors,” said Dr Gono.
“The US$5 million is not required all at once, it is staggered for say five years meaning it can actually come from their profits.
“This is because those who borrow from them are vulnerable people like civil servants.”
He said there were 164 micro-finance out of 257 financial institutions the RBZ supervised constituting 64 percent hence it was critical to have regulations dedicated towards the affairs of the greatest number of players as what the Finance ministry sought to do.
Unethical and illegal conduct by the institutions, said Dr Gono, have in the past been reported in the media, some of which include charging usurious interest rates as high as 50 percent per month on loans advanced to the public.
He said they have also operated pyramid schemes where unsustainably high returns were promised  investors, making desperate borrowers sign documents ceding their immovable properties to the lender and selling or disposing borrowers’ properties.
“Since the advent of multi-currency system, interest rates charged by money lenders are currently unregulated, leaving borrowers entirely at their mercy, under the existing legislation, authorities are not sufficiently legally empowered to adequately supervise operations and to take corrective and punitive action to protect the public,” he said.Advertisement

Dr Gono said the regulatory and supervisory framework of the Banking Act was mainly suited for mainstream banks and not micro-finance banks who require a separate regulatory framework.
He said the proposed Micro-finance Bill sought to provide stronger safeguards and measures to protect borrowers and depositors.
Appearing before the same committee, the Zimbabwe Association of Micro-finance Institution chief executive officer, Mr Godfrey Chitambo said while the Bill was progressive, a number of clauses needed clarification.
He said the Bill tended to favour the borrower than the lender in many respects as the lender could lose both the principal amount and interest if he was found wanting.
“The tone and effect of the Bill is tilted too much in favour of the borrower.
“The burden is too much on us so much that if a borrower prove that we did not inform him enough we will lose both the money we lended and the interest,” he said.
“The Bill makes no attempt to provide recourse to money lenders who are defrauded by cunning literate clients,” he said.
The Zimbabwe Stock Exchange also gave its views on the Securities Amendment Bill.